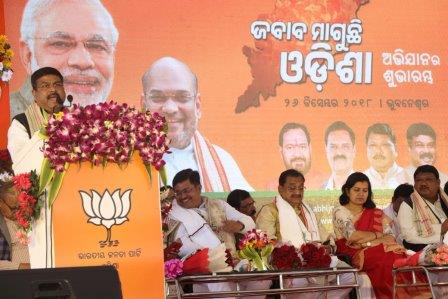 Launching the party’s ‘Jabab Maguchhi Odisha’ campaign’ here, Pradhan questioned who is feeding the demon of corruption in the state.

He asked him to clarify what Sahu was doing at Naveen Niwas, the residence of Chief Minister, and how he is linked to him.

He targeted the state government for failing to ensure 35% irrigation to the farmlands in the state as promised by it.

He also accused the ruling BJD of failing to utilise central funds and providing lands as promised for expeditious completion of rail and road infrastructure in the state.

“Odisha was never getting more than Rs 1000 crore in railway budget but now the State is getting around Rs 5000 crore. Is it not visible to Naveen Patnaik? He is hiding his failures,” said Pradhan.

He alleged that the indifferent attitude of the BJD government was visible in the Talcher-Bimlagarh and the Paradip-Haridaspur rail projects.

He also questioned his commitment for ensuring 33 per cent reservation for women in state legislature and Parliament.

“The Chief Minister talking of 33 percent reservation issue for women must clarify how many women ministers are there in his cabinet. At a time when Kundali victim, women and children of Gumudumaha are still crying, the CM is shedding crocodile tears, he alleged.