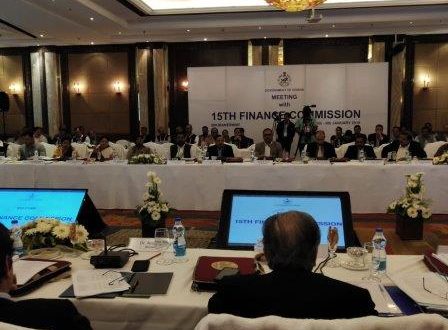 
Bhubaneswar: The 15th Finance Commission met the representatives of the Panchayati Raj Institutions (PRIs) and the Urban Local Bodies (ULBs) here on Tuesday.

The Commission was unanimous that all the three tiers of Panchayati Raj Institutions must get a part of the financial devolution.

It was felt that enhancing revenue capabilities was essential to their viability.

The Commission was concerned that levying of property tax is still not allowed – it deserved priority along with other measures to make the PRIs and ULBs self sufficient, felt the Commission.

At the meeting, the Commission noted that Odisha was a shining example of women empowerment. 10 of 16 representatives of the PRIs and ULBs were women – actual representation even beyond legislated 50%.

The Commission felt that it was ironic that with 72% of India’s mineral resources, manufacturing sector in Odisha was still very moderate. This has resulted in low job creation.

With abudant mineral wealth, Odisha is truly an example of a state which is nowhere near reaching its true growth potential. Some recent initiatives of the State Government have been good and effective, but deeper changes in the regulatory framework, combined with improved infrastructure and logistics are needed to make the State truly competitive, felt the Commission.

The Commission is of the view that the state of Odisha has a great future given political stability and other factor endowments.