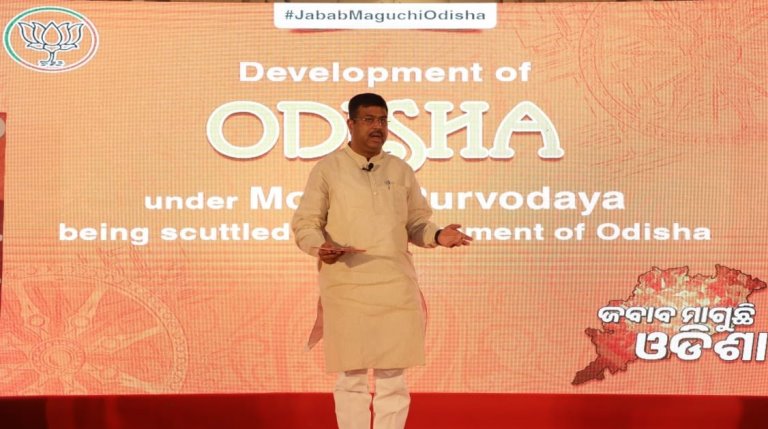 Bhubaneswar: Union Petroleum Minister Dharmendra Pradhan on Saturday came down heavily at the Odisha government for not supporting in implementation of Rs 1,36,417 crore central projects in the state.

He said the projects would have accelerated growth and provided direct and indirect employment opportunity to youths in Odisha.

Pradhan said Rs 51395 crore projects of petroleum and natural gas has been obstructed while Rs 55,563 crore road, transport and highways projects have been affected in the state.

Railway projects of Rs 12,286 crore, non-petroleum investment of Rs 15,413 crore, health and education projects of Rs 560 crore and tourism and heritage projects of Rs 200 crore have been obstructed by the state government, he alleged.

“Paradip could have been the Energy gateway to Eastern India through its expansion plan with additional project of Rs 22,000 crore but Odisha Govt is yet to allot 2290 acres of land for the project. The Sate Government has also not allowed land for the Rs 1970 crore Textile Park at Bhadrak,” said Pradhan.

He said the Odisha government is delaying in signing the Joint Venture Agreement for Paradip Plastic Park limited which would provide 15000 direct and indirect jobs opportunity to youths in 80 plastic units.

“The Coastal Highway Project can begin a new era of progress and development in the coastal region of Odisha and Eastern region of India but Odisha Govt has been making changes in the alignment on Puri-Satapada & Konark- Astarang routes to delay the project,” said Pradhan.

Better road and infrastructure can push development process but unfortunately the Odisha government has stalled around 5000 km Highways Expansion Plan projects in Odisha worth over Rs 56,563 crore, he informed.