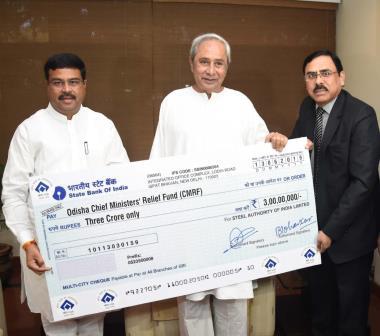 “I had a cordial meeting with Dharmendra Pradhan on how we can give further employment, development and welfare of the mutual programmes of the Centre and the state,” said the Chief Minister.

It was the first official meeting between the two leaders after the general elections.

Pradhan said there was no political discussion held during the meeting.

No political motives should be attached to it as the people have already given their mandate, he added.

Pradhan said they discussed ways to work together to usher in economic and industrial development and generate employment opportunities to bring all round prosperity for the people of Odisha.

“We also discussed enhancing Odisha’s footprints further in the steel sector. Steel will have a large influence in rejuvenating the economy in Odisha. The centre is committed to develop Odisha as a global hub of ancillary industry in the steel sector,” he added.

The Union Steel Minister also presented a cheque of Rs 3 crore by Steel Authority of India Ltd (SAIL) to the Chief Minister’s Relief Fund for the ongoing restoration work in the aftermath of severe cyclonic storm Fani.