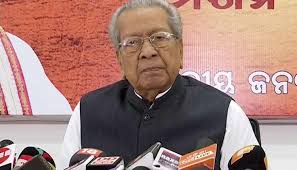 The President has appointed Harichandan as Andhra Pradesh Governor.

Besides, Anusuiya Uikey has been appointed as Governor of Chhattisgarh.

Biswa Bhusan Harichandan, a five-time MLA, was a minister during the BJD-BJP alliance in Odisha government. He was also BJP president of Odisha unit.

After the announcement, Harichandan thanked President, Prime Minister for appointing him as Andhra Pradesh Governor.

He also thanked Union Petroleum Minister Dharmendra Pradhan for playing a major role for his appointment as AP Governor.