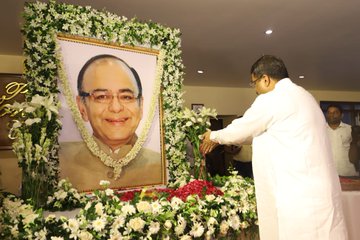 Dignitaries from all parties attended the ceremony.

“I shared a deep personal bond with Jaitley ji, his mentorship steered me through doubt and dilemma and always had a calming influence on me,” said Pradhan.

“I have fond memories of him, framing sentences in his budget document for allocating funds to commemorate the 200 years of Paika rebellion. Good times or difficult,Jaitley ji was a man for all seasons. I pray to Lord Jagannath to bless his family & grant peace to his departed soul,” Pradhan informed.