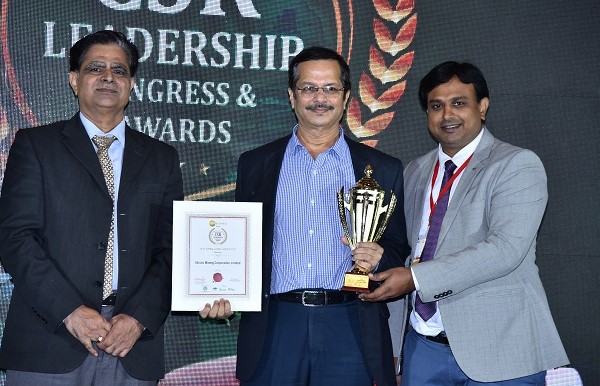 Bhubaneswar: In recognition of its sustained efforts & significant contribution in Corporate Social Responsibility (CSR), Odisha Mining Corporation (OMC) has been conferred with award for best practice in CSR at the 18th Asia Pacific HRM Congress and the Zee Business National CSR Leadership Award in Bangalore this week.

OMC is fast emerging a frontrunner in its role as a responsible corporate citizen in terms of its commitment and contribution to the socio-economic development of people in the mining regions and beyond.

The social and human dimension of the corporation is getting visibility due to its growing CSR spend beyond mandated 2% norm, and the difference it makes to the lives of the people.

OMC managing director R. Vineel Krishna plays the guiding force in achieving its aim of improving the quality of life of people, especially of disadvantaged sections of the society.

Among others, some of the flagship CSR projects of OMC include development of Adarsh Vidyalaya, Multilingual education program, OMC Super program, healthcare facilities, development of Model villages with common basic facilities, ODF villages in the mining region, environmental sustainability, promotion of sports etc.

The largest state PSU in the mining sector of the country has been recognised earlier for its CSR activities at state and national level.