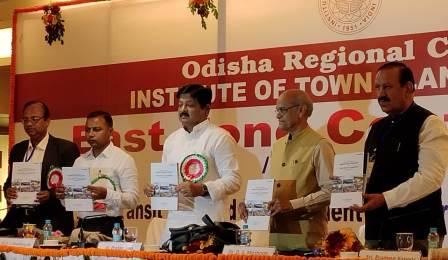 However, the private sector is also required to be encouraged in the provision of infrastructure in the town, he added.

The Minister also opined for the re-densification of core areas of Bhubaneswar for fast mobility for which strong and planned transport network is required to be provided along with high density mixed land-use connecting transport nodes.

With reference to “Future Sports City, Bhubaneswar”, he mentioned that Bhubaneswar city requires to be developed on the theme “Sports for Youth and Youth for Sports” so as to conceive Bhubaneswar as the future sports capital of the country.

He emphasized that basic amenities are required to be provided to create a livable environment in towns and cities.

He also stated that as the Master Plan period is of about to 20 years and it will be most appropriate to opt for shorter solutions/goals without affecting the original concept of master plans.

Prof. D.S. Meshram, Institute of Town Planners president, highlighted that while adopting Transit Oriented Development concept in cities, extra care is required to be taken in the existing areas.

As far as the application of TOD concept in the new growth centres, the planners have to take into consideration that the story of the existing transit nodes in not repeated, he added.