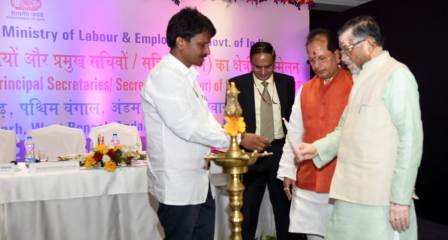 Bhubaneswar: Minister of State for Labour and Employment Santosh Kumar Gangwar on Tuesday said both the Central and state governments are making coordinated efforts for the welfare of labourers.

He was addressing the Regional Labour Conference in Bhubaneswar on Tuesday.

The Minister said that any law can attain its goal with the proper implementation and it is the state governments which are implementing them on the ground.

Gangwar said that recently Government of India has taken many steps for the welfare of workforce of the country.

Code on Wages has been passed by Parliament in August this year and now State Governments should frame rules regarding Code on Wages, fix minimum wages and organize awareness campaign so that maximum number of unorganized sector workers may be benefitted, he added.

Apart from the simplification of labour laws, the union government has launched a pension scheme for unorganized sector workers and small traders and self-employed persons, the Minister informed.

He further said that the Ministry is using information technology to improve services of EPFO and ESIC and bring more transparency and accountability.

He expressed hope that the regional labour conference will be successful in creating better coordination with state governments.