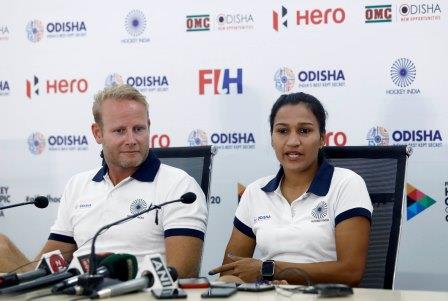 
Bhubaneswar: The Indian Men’s and Women’s Hockey Teams will look to book their spots at the Olympic Games Tokyo 2020 when they take part in the FIH Hockey Olympic Qualifiers on 1st and 2nd November at the Kalinga Hockey Stadium here.

The winners of the FIH Hockey Olympic Qualifiers Odisha will qualify for the Olympic Games Tokyo 2020.

The winners will be determined as follows: teams will be ranked according to the number of points each has accumulated in both matches (for each match, 3 points are awarded to the winner, 1 point to each team in the event of a draw and 0 point to the loser).

If there is equality among the two teams, then the teams will be ranked according to their respective goal difference. If equality remains, a shoot-out competition will be played to establish the winner.

Therefore, the objective of both the Indian Men’s and Indian Women’s Hockey Teams will be to secure direct qualification for the Tokyo 2020 hockey tournaments – which will be staged in Japan’s capital city from 25 July to 7 August next year and involve 12 Men’s and 12 Women’s teams.

Both the Indian Teams were drawn at home against their respective opponents due to their higher ranking.

The Indian Men’s Team will be facing Russia only for the third time since 2008, with the previous two encounters seeing the hosts register huge victories (8-0 in a Round-Robin match of the World Hockey Olympic Qualifiers in 2008; and 10-0 in the Pool A match of the FIH Men’s Series Finals Bhubaneswar Odisha held earlier this year).

Speaking ahead of the two important matches, Indian Men’s Team’s Captain Manpreet Singh said, “We are well-prepared for this tournament. We are not concerned about the disparity in world ranking. For us, every match we play is like we are playing against World Champions. We have suffered in the past due to overconfidence and we will not let that happen this time.”

Russian team Coach Vladimir Konkin, on the other hand, said, “We are ranked lower than India but in our hearts and in our mind, we are ranked higher and we will really fight till the last minute. We are definitely prepared to play better than what we did during the FIH Series Final.”