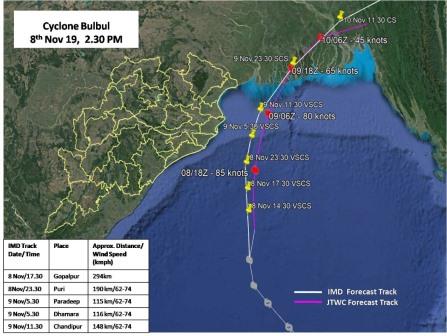 Bhubaneswar: The Odisha government on Friday said it is fully prepared to meet the Cyclone Bulbul, which has intensified into a very severe cyclonic storm and is heading towards West Bengal coast.

The Indian Meteorological Department (IMD) has predicted that heavy rainfall and strong wind are likely to prevail over the coastal Odisha for the next two days.

Special Relief Commissioner (SRC) Pradeep Jena said the district administration have been asked to be in readiness as some of the coastal districts have started receiving light rainfall on Friday.

Schools across nine coastal districts have been ordered to remain closed.

The residents in these districts have been cautioned against venturing out of their homes and advised to take shelter at safe places.

“Tourists and visitors must avoid sea beaches and not enter into the sea during Cyclone Bulbul as sea would be very rough. The collectors are advised to ensure that no one ventures into the sea,” said the SRC.

He said CESU and NESCO have been alerted to remain fully prepared to meet eventual situations.

As per reports of the Fisheries Department, all 19653 fishing trawlers and boats have returned to base in Odisha. No fishermen are in the sea. No one is allowed to venture into the sea.

The IMD said strong wind speed reaching 35– 45 kmph and gusting to 55 kmph likely to prevail along and off Odisha coast.

The IMD said it is very likely to increase becoming squally wind speed reaching 45-55 kmph gusting to 65 kmph by November 8 afternoon along and off Kendrapara, Jagatsinghpur, Balasore and Bhadrak districts.

Gale wind speed reaching 70-80 kmph gusting to 90 kmph is very likely to occur from around November 9 noon along and off Jagatsinghpur, Kendrapara, Balasore and Bhadrak districts for subsequent 12 hours and decrease thereafter, it said in the latest bulletin.