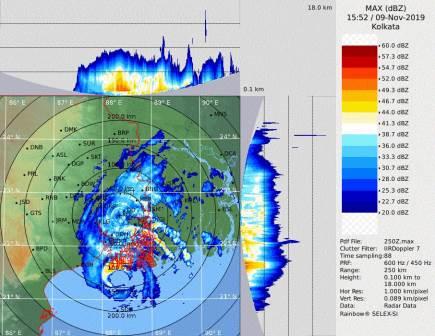 New Delhi: The very severe cyclonic storm Bulbul made landfall near Sagar Islands in West Bengal at around 9 PM on Saturday.

The landfall process started with forward sector of the wall cloud region entering into land at around 8.30 pm with a wind speed of 115-125 kmph gusting to 140 kmph, said the India Meteorological Department (IMD).

Cyclone Bulbul moved further northeastwards with a speed of about 12 kmph during past 6 hours.

It is likely to weaken gradually and move northeastwards and cross West Bengal-Bangladesh coasts between Sagar Islands (West Bengal) and Khepupara (Bangladesh), across Sunderban Delta during next 03 hours as a severe cyclonic storm with maximum sustained wind speed of 110-120 kmph gusting to 135 kmph.

The IMD said light to moderate rainfall with isolated heavy to very heavy rainfall is likely to continue over Balasore district during next 03 hours and over west & east Medinipur, south & north 24 Parganas during next 12 hours.

Gale wind speed reaching 110-120 kmph gusting to 135 kmph is likely to prevail along & off west & east Medinipur, south & north 24 Parganas during next 06 hours and decrease thereafter.

Squally wind speed 50-60 kmph gusting to 70 kmph is very likely to prevail over Kolkata during next 06 hours.

Prior to the cyclone Bulbul landfall, it has wreaked havoc in the coastal districts of Odisha.

While trees were found uprooted, the power infrastructure and thatched houses have been damaged following the cyclonic storm.

The government also expected that around 40 percent of the crop in the affected districts might have damaged.