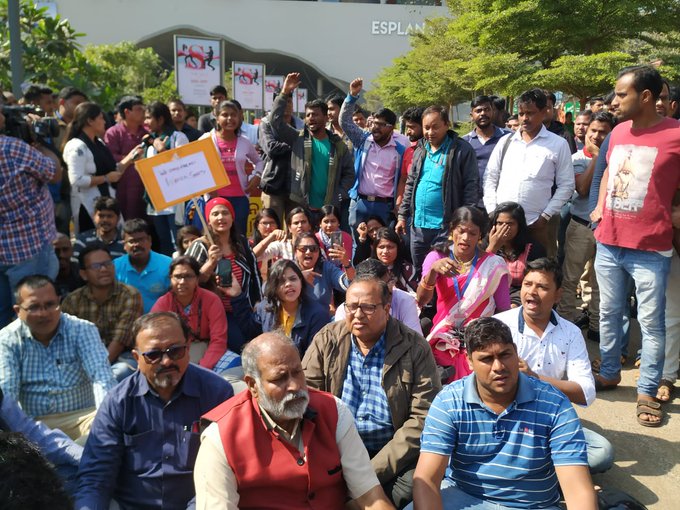 Bhubaneswar: Journalists on Sunday held a massive protest in front of Esplanade One Shopping Mall here condemning attack on a woman journalist and cameraman at the shopping mall on Saturday.

They also demanded action against the persons involved in the incident.

The media persons staged a dharna demanding stringent action against the shopping mall staff, who allegedly thrashed a woman journalist and cameraperson while they were covering a report on illegal parking fee collection by the shopping mall.

Woman journalist Swati Jena and video journalist were attacked by some staff of the shopping mall when they had gone to cover a story regarding illegal collection of parking fees in the mall.

Following the incident, Jena filed an FIR at the Saheed Nagar Police Station against the mall staff members.

She said that the staff threatened them and thrashed them when caught shooting the illegal parking fee collection.

Bhubaneswar DCP Anup Sahoo informed that two persons have been arrested and further probe is on by an additional DCP.

He said the police have taken the matter seriously and stern action would be taken against the persons involved in the incident.

Meanwhile, the Congress and BJP demanded safety of the journalists in the state.

“A thorough investigation is needed to find out under what circumstances the woman journalist was detained in a room of the shopping mall. Govt should take steps for the safety of journalists,” said Odisha Congress leader Nishikant Mishra.

“2 staff of Esplanade mall were arrested, but no action was taken against big fish like marketing manager of the mall who orchestrated the attack. We urge the govt to enact law for safety of journalists,” said BJP leader Golak Mohapatra.