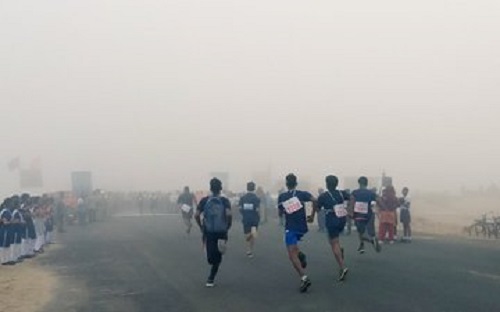 Puri:  Despite a cold and foggy morning, great cheer prevailed on a road near the sea beach here as over 4,000 people, including a large number of students and foreigners, participated in the first edition of ‘Puri Mini Marathon’ held in the Pilgrim City on Thursday, on the occasion of Netaji Subhash Chandra Bose Jayanti.

Odisha Sports and Youth Affairs Minister Tusharkanti Behera flagged off the marathon that began from the District Sports Complex at Talabania covering around 8-km route culminated near the Beach Hotel Asiana Lagoon.

The Puri mini-marathon was organized by the District Administration in association with Odisha State Disaster Management Authority (OSDMA), Bay of Bengal Initiative for Multi-Sectoral Technical and Economic Cooperation (BIMSTEC) and the National Disaster Response Fund (NDRF).

Total prize money of Rs 1.90 lakh was distributed to the winners in all three categories (for both genders). Out of the total Rs 1.90 lakh, the NDRF provided half of the prize money to the District Administration.

The first prize carries a cash reward of Rs 30,000, second prize Rs 20, 000, third prize Rs 10, 000, a trophy and certificate. While the first, second and third prizes were given to three persons, each for male and female category, seven consolation awards were given to seven participants of each Rs 5, 000.

In the male category, Mukund Banra secured the first position while Rashmi Ranjan Nayak and Sudhansu Nayak got second and third spots respectively.

Among the winners, most of them are first-timers and their joy was palpable while the spirit was in dominatable.

“I am so happy and lucky that I got the first prize as I have given my best today. This is a result of my regular practice which I do every morning,” said an elated Mukund, a local boy, who aspires to represent his state and country in Olympics in future.

The winners of the Puri mini-marathon were felicitated by the Sports Minister in presence of several dignitaries, district officials, and other eminent civilian personalities.

Congratulating all the winners and praising the District Administration and NDRF team, the Hon’ble Sports Minister, who is also a native of Puri, said: “Puri has already made its mark in the tourism map of the world but organizing such event will take the Pilgrim City to newer heights and make it as an ideal and a global city in future”.

Expressing his pleasure over the arrangements and smooth conduct of the event in a short span of time, the Minister announced that from next year the Sports Department will lend its helping hand and provide all kinds of support to make the annual mini-marathon a bigger and better one.

Hearing the minister’s announcement, the huge crowd gathered near the podium gave thunderous applause by appreciating his gesture.

Puri MLA Jayanta Kumar Sarangi, who is also a fitness freak, lauded the initiative of the District Administration and encouraged the participants by saying “running is a good exercise to stay healthy and fit in today’s busy life”.

“We should work as a team when it comes to organizing such events by forgetting our political affiliations and difference of opinions as ultimately our city’s image gets a boost in the world,” the Puri MLA said, by adding he is always available to join and work for a noble cause.

The National Disaster Response Force (NDRF) team has worked very meticulously looking after each and every aspect of the event in order to ensure the participants had great and memorable time.

The Puri Mini Marathon is an annual event that will be held on January 23 every year with a new theme and to provide a common platform to promote health and active lifestyles.

“We have decided to organize a mini-marathon in Puri every year to bring people from Puri and beyond who are passionate about running, sports and a living healthy and active lifestyle. Besides, through this event, we would like to create awareness and instill a habit of preserving and protecting our invaluable heritage monuments from disasters,” said Puri District Magistrate-cum-Collector, Balwant Singh.

Besides, the Collector urged everyone to come together and work in a team in order to make Puri Mini-Marathon a most sought-after international event in near future.

The District Administration has deployed over hundreds of officials including fire brigade personnel, police officers and medical officers for smooth conduct of the event.

As many as four platoons of police force were deployed at several points across the road with 80 Home guards, 9 Assistant Sub-Inspectors, 2 Inspectors, City DSP, DSP (Traffic) and Puri Revenue Inspectors.

The security arrangements were personally monitored by Puri SP Umashankar Dash in order to avoid any untoward incident during the course of the event.

At the end, Puri Collector Balwant Singh and NDRF DIG Mohsen Shahedi presented mementos to all the guests present on the stage by appreciating their gesture.