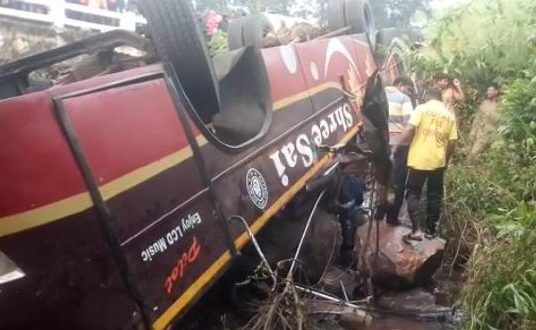 
Bhubaneswar: Odisha Chief Minister Naveen Patnaik on Wednesday announced an exgratia of Rs 2 lakh each to the next of the kin of the deceased in the Ganjam bus accident.

At least seven people were killed and over 40 injured after a bus carrying them skidded off a bridge at Taptapani Ghat in Ganjam district in the wee hours on Wednesday.

The passenger bus was heading to Berhampur town from Tikiri area of Rayagada district. The bus plunged into the Ghat when it was negotiating the turns of the mountainous road in Taptapani ghat.

Fire fighting teams from Mohana, Sanakhemundi, Digapahandi, and Berhampur have been pressed into service for rescue operations.

The Chief Minister directed the Ganjam district collector and SP to expedite relief and rescue operations.

He expressed deep grief and sorrow at the loss of seven persons in the tragic Ganjam bus accident at Taptapani.

Chief Minister conveyed his deep sympathy to the bereaved families.

Commerce and Transport Minister Padmanabha Behera said the preliminary investigation shows that the the bus might have overturned after the driver lost balance due to low visibility in foggy condition.

The Minister said the Regional Transport Officer has been directed to conduct an inquiry and submit a report.