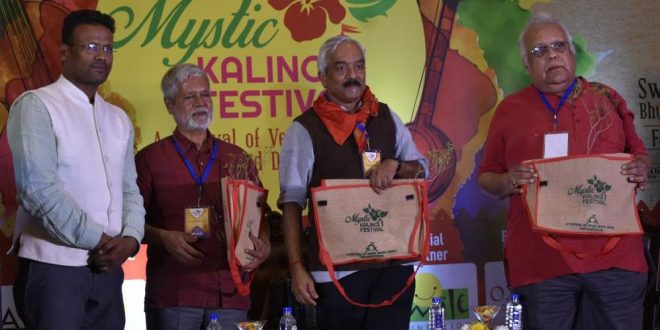 In a session dedicated to Shakti Traditions of India, debut novelist Piyoshi Baruah said mysticism is ingrained in Indian culture and hence, one can find a lot of works.

“Our literary works are full with stories and poems on Bhakti, Shakti and Tantra traditions and talk about mysticism explicitly. In western literature one can hardly find similar literary work. So mystic literature is the strength of Indian literature we can say,” she said.

Mysticism, often related to Tantric and Shakti traditions in India is misunderstood as a subject dealing with sex. But the truth is farther from reality as seen in ancient monuments.

“Yes it is true that Tantric tradition is generally known to have promoting sex and sorcery, but the traditional monuments such as 64 Yogini Temple in Bhubaneswar does not depict any of these imageries, said Adyasha Das, singer, author and associate professor at the Indian Institute Of Tourism And Travel Management who was one of the panelists on Shakti Traditions.

On the concluding day, a total of eight sessions were held on various subjects such as mystic traditions, mysticism in classical dance and poetry along with performances on Tulsi Das poems and sufi songs.

In the two-day programme, 15 sessions dedicated to various aspects of Mysticism in India were held along with music and performances based on songs written by traditional mystic poets.

In the Mystic Mic programme, a parallel session dedicated to allow participants to showcase their talents in music, classical dance, painting and poem recitation, were held.

On the concluding day, a total of 80 participants took part and showcased their talents in guitar, tabla, classical and semi-classical dance, poem writing. In the two-day session close to 200 participants performed in Mystic Mic.

On the opening day, literary icon and Padma Bhushan awardee Manoj Das was felicitated with Kalinga Literary Awards for his outstanding contribution to English and Odia literature.