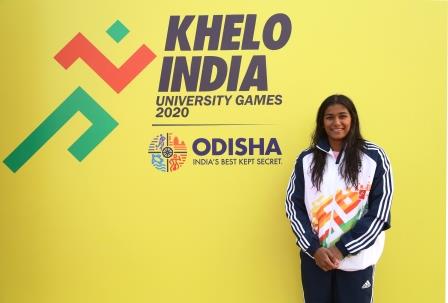 
Bhubaneswar: Riddhi Bohra can playfully claim that she has come in between two fiercely loyal and close twin sisters.

Late on Monday evening, she found herself sandwiched between Jyoti Patil (Gold) and Aarti Patil (Bronze), identical-looking competitors, when she stepped up to take her Silver medal in the 50m Breaststroke in the Khelo India University Games (KIUG) 2020.

This, however, is the tip of her achievements. Riddhi, a BBA student at Christ College, Bengaluru, has won multiple state and national medals in swimming despite having injury as her constant companion.

“This is my first medal in almost three years,” she revealed after winning the medal.

“I have more often than not competed with some kind of injury or another, with some pain in my body,” she added.

Despite all the suffering, Riddhi never thought of giving up even once though.

“I have just been going on. I must confess that I missed out on quite a few medals, especially in the recent past because of injuries,” she said.

Ironically, it was an injury that got her into swimming in the first place. She was a skater in her youth, but a nasty injury that left her with a broken arm and multiple broken teeth shooed her away from the sport.

“I was a sensitive kid,” she said and added, “And the fear of getting injured again meant I gave up skating right there and then.”

Her mother promptly enrolled her into swimming, mainly so that she would learn a life skill. But a fighter that she was, she took it up as a career option. Soon enough, the pool became her salvation.

Talking about her injuries, Riddhi pointed out that her initial years were rough because of stress injuries in her shoulders. She swam through that pain for a long time, convincing herself that it wasn’t anything serious.

But it came to a time when she had enough and had to take a break to rest and heal. The long lonely hours of rehab, and the subsequent comeback took a toll.

“In the gym, I would feel very strong and I’d feel that I would do well. But the pool always invariably felt different,” she said.

Incidentally, Riddhi’s brother, Kalp, was among the medals at the Khelo India Youth Games 2020 in Guwahati last month. In many ways, that pushed her towards another comeback, another shot at a medal. “Seeing my brother perform was a huge motivation. I realized that the key was to not put heavy expectations on myself,” she said.

“I decided to just go into the pool, give my best and enjoy myself.”

The formula worked perfectly, promptly fetching her silver at the Khelo India University Games 2020 in Bhubaneswar.