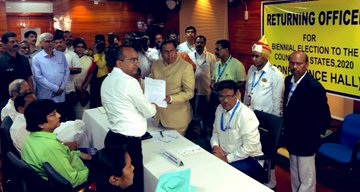 Bhubaneswar: The Biju Janata Dal (BJD) candidates on Wednesday filed their nomination papers for four Rajya Sabha seats, election for which is scheduled to be held on March 26.

BJD president and Chief Minister Naveen Patnaik and other senior leaders of the party were present on the occasion at the Odisha Assembly.

As the Bharatiya Janata Party (BJP) has decided not to field any candidate in the Rajya Sabha polls, the ruling BJD is all set to get the four seats.

Four of the 10 Rajya Sabha seats from Odisha will fall vacant after the completion of tenure of three BJD lawmakers — Anubhav Mohanty, Narendra Kumar Swain and Sarojini Hembram — and Congress member Ranjib Biswal on April 2.

Anubhav Mohanty has already been elected to the Lok Sabha from Kendrapara Parliamentary constituency in the 2019 polls.