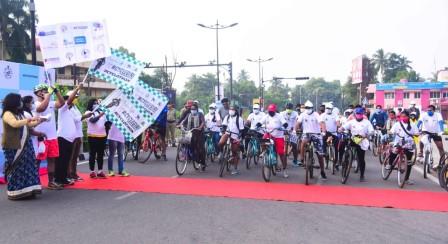 The cyclists who joined the event also constituted girls and women and they came on their own to join the cause and spread the awareness.

Senior officials of BSCL were present.

The cyclathon was organised in collaboration with Bhubaneswar Municipal Corporation and some major NGOs like KRIAA Foundation, Seva Prayash Foundation, AwAAkeN of the city.

Speaking on the occasion, Siddhant Mohapatra said, “Cycling not only helps in reducing pollution, but it also helps in controlling the bad habits like smoking and taking oa tobacco as they contribute towards the major chunk of cancer across India. As the bad habits are minimized by habit of cycling, we must promote it and participate in cycling activities.”

Urging parents to help kids get inspired about the love for cycling, the actor and former Member of Parliament said, “We can gift a cycle to a kid on his/her birthday so that the cycling spirit in that kid would always be eager to practice cycling whenever there is an opportunity.”

Olympian Anuradha Biswal also remembered the childhood days and how there was a time in which cycling was a great pastime and everyone was involved.

“We have to promote cycling again to make us fit and healthy so that we can prevent ailments like cancer,”she added.

Dr Sanjay Mishra from Apollo Hospital also spoke. A pledge taking ceremony was also undertaken by all participants to respect cyclists on roads and to promote ‘Cyclegiri’.

The cyclathon event with a central theme on awareness on cancer culminated at Kalinga Stadium after a stretch of 5km starting from Ekamra Plaza. At the stadium the Ollywood actor again spoke on importance of cycling in boosting immunity, disease prevention and especially in keeping cancer at bay.

Leading oncologists of city-based hospitals and cancer survivors were felicitated on this occasion at Kalinga Stadium. Doctors also called for early detection of cancer. Later, mono-act was staged by educationist and social worker Sabita Patnaik and her team.

It can be mentioned here that the Bhubaneswar Smart City Limited is organizing Cyclegiri every week on Friday and last week it was an oath taking ceremony by Ola drivers to respect the cyclists on city roads.

The weekly event started following a cyclathon on October 9 as part of the ‘Cycles4Change’ Campaign.

In a pandemic situation when physical activities are considered as a major initiative for building immunity against the disease spread, the cycle-centric activities by the city authorities have created a new craze among the citizens for better fitness and good health.