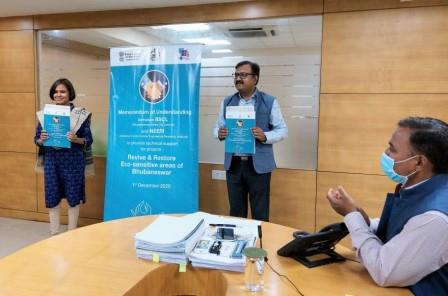 Speaking on the occasion, BSCL CEO Prem Chandra Chaudhary said, “NEERI’s association will be a great asset for the CITIIS Project as it will be responsible for all environmental, solid waste, water and sanitation related technical support including preparation of the overall masterplan and concept plan/zoning plan. It will also review the work produced by BSCL team and provide technical advice/feedback for similar best practices across the globe.”

It can be mentioned here that under the CITIIS Programme the Temple City through its Bhubaneswar-Active (B-Active) proposal has proposed to enhance the quality of Public Open Spaces as it won the challenge in February 2019 from among 67 Indian Smart Cities.

The Ministry of Housing and Urban Affairs (MoHUA) with the French Development Agency (AFD) and European Union jointly has launched the CITIIS Programme in July 2018 as part of the “Program to Fund Smart City Project”. B-Active proposal will receive a grant of nearly Rs 80 crore in three-year time of its implementation.

Under the component, Water in B-Active proposal from the city as proposed to MoHUA, the city will improve the natural Drainage Channels No. 7 and 10 and reviving heritage water tanks in the Old Town area.

The MoU with NEERI will help BSCL in system designing and modelling of water-related projects under the CITIIS Programme as the institute is the leader is the country and has successfully implemented many such projects across India.

After the signing of MoU with BSCL, NEERI will first extend its technical expertise towards the short-term Quick Win Project under CITIIS Programme along the Drainage Channel No. 10 proposed as a pilot initiative to create a Waste Water Park and Urban Agriculture both within the premises of BDA City Centre.

While NEERI under the Council of Scientific and Industrial Research (CSIR) is a premier research and development organization and has its footprints globally in the area of environmental science and engineering, BSCL is established by the Government of Odisha as a Special Purpose Vehicle company for implementation of the Smart City proposal of Bhubaneswar through a notification on February 23, 2016.