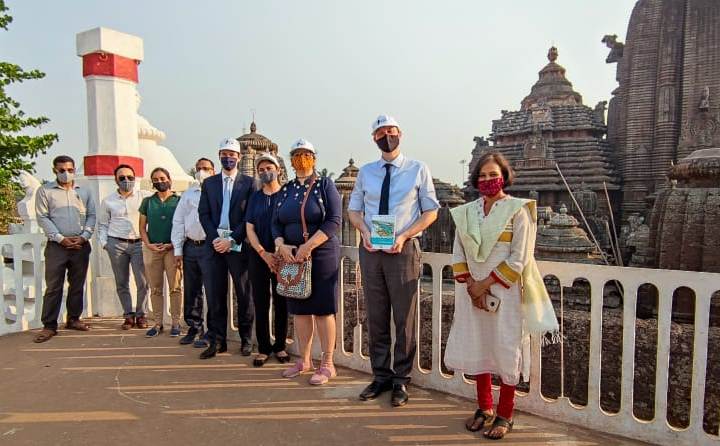 The delegation included Thomas Salez, Economic Counsellor-Energy and Industry Division from the Regional Economic Services of the French Embassy. Representatives from the CITIIS PMU at National Institute of Urban Affairs (NIUA) were also present.

The meeting was chaired by Harish Chandra Nayak, Secretary, BDA. This was followed by site visits to CITIIS Project locations, including, heritage sites like Debi Padahara and Ganga Jamuna Tanks.

Bhubaneswar’s B-Active (Bhubaneswar-Active) proposal was submitted by BSCL under the theme of Public Open Spaces. It was selected as one of the 12 city proposals under CITIIS Challenge Programme in February 2019 at the Second Apex Smart City CEO’s conference held in Delhi.

Subsequently, a tripartite agreement was signed on March 5, 2019 for the CITIIS Programme between MoHUA, Government of Odisha and BSCL.

CITIIS Programme is supported by the national PMU at NIUA in New Delhi.

The intention behind B-Active proposalis to resolve the issues associated with service delivery to improve the quality of public open spaces across 2,470 acres, encompassing parts of the planned area and the Old Town area of Bhubaneswar City.

While addressing the issue of declining levels of physical activity, a Smart Active Living Strategy is proposed to maximize the use of the open spaces for different assets (components) in the city, including Streets, Water, Parks & Open Spaces, Sports & Playgrounds, and Heritage.

For the end users, it will increase access to city’s assets, and enhance the users’ and visitor’s participation in the activities and opportunities.

Priority is given to including use of data and its confidentiality, gender equality, air quality and public health, innovation, social inclusion, improving resiliency, introducing technology and ensuring maximum citizens participation and universal accessibility.