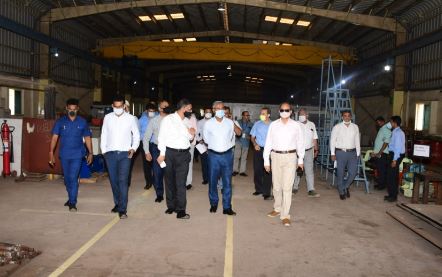 This was a part of the ‘Industry care’ initiative to engage formally with district wise industries and to raise awareness about business reforms and institutional mechanisms among industries.

Senior officials from the Government of Odisha met industries located in Balasore, Bhadrak and Mayurbhanj at the NOCCI Business park in Balasore, today.

The event started with a keynote address by Industries secretary Hemant Sharma, followed by an address by Asit Kumar Tripathy.

A detailed discussion with the participated industries also held followed by the presentation on District Investment Promotion Agency (DIPA) by IPICOL MD Dr. Nitin B Jawale.

The meeting was attended by 19 large scale industries and a total of 150 companies such as GAIL, Highland Agro, Falcon Marine exports, Everest Industries, Emami Paper Limited, IOCL among others.

The major industrial related issues discussed are: the Gas Grid infrastructure implementation by GAIL for industries located in these districts, the fast-tracking of textile unit to be set-up by IOCL at Basudevpur in Bhadrak district, expansion plan of HIL Limited at Somnathpur Industrial Estate, and plan for inauguration of Highland Agro.

Senior officials from the department of MSME including MSME secretary Satyabrata Sahu interacted with the industries in a session held on MSME.

A presentation on the issues of MSME was presented by C P Bhartia, North Orissa Chamber of Commerce & Industry (NOCCI).