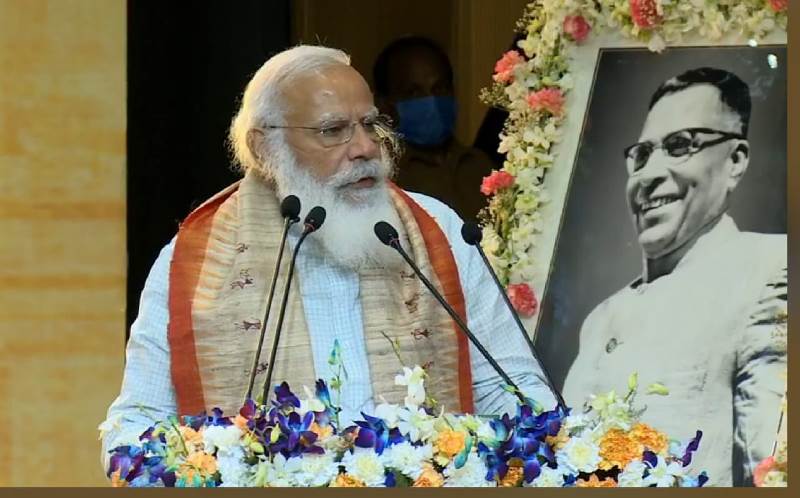 The book, available in Odia and English so far, has been translated into Hindi by eminent Hindi author and translator Shankarlal Purohit.

While unveiling the Hindi edition of ‘Odisha Itihaas’, Prime Minister Modi said,“It is important that diverse and comprehensive history of Odisha should reach people of the country. The collective history of our states represents the historical strength of entire India. It is important for today’s youth to learn and get inspired by our history as history is the mirror to the future.”

The Prime Minister remembered Dr Mahtab’s rich contribution in the freedom struggle of India and lauded him for his efforts in simultaneously working towards reformations in the society.

He appreciated the vision of Dr. Mahtab as the first Chief Minister of Odisha in bringing growth and prosperity to the state by developing industry and infrastructure.

Prime Minister also mentioned how this book launch coincided with the celebrations of Amrit Mahotsava, which is celebrating 75th Independence year, with the aim to revive the stories about our valiant freedom fighters.

The Prime Minister emphasized how struggles like The Paika Rebellion, Ganjam Revolt, Sambalpur Struggle etc always gave new energy to the fire of revolt against the British rule.

On this occasion Union Petroleum & Natural Gas and Steel Minister Dharmendra Pradhan said, that Dr. Mahtab’s ‘Odisha Itihaas’ is not only a book but it stands for intelligent, valiant and courageous Odias.

He said the Hindi version of this book will make it possible to take the history of Odisha to a wider readership.

On behalf of the Odia community, Pradhan thanked the Prime Minister for his immense affection for Odisha and for always appreciating the rich heritage and culture of Odisha. He went on to add that PM Modi was the first PM who deeply cared for Odisha and helped take the state to newer heights.

While speaking about finally realising the dream of having the Hindi version of ‘Odisha Itihaas’ ready, Bhartruhari Mahtab MP(LS), Cuttack reflected upon the relentless efforts put in by the translator Shri Shankarlal Purohit.

He profusely thanked Dharmendra Pradhan for initiating this project, which could enable Hindi readers to get an in-depth knowledge about Odisha.

He fondly recollected how his father Dr. Harekrushna Mahtab had worked 10-12 hours daily for 2 years to write the original book.

On this occasion a short film on Dr. Harekrushna Mahtab and his achievements was screened.  Intellectuals from 34 places in 30 districts joined this programme.