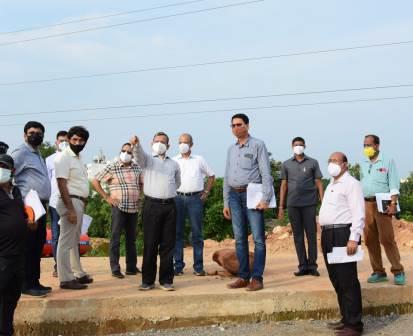 
Bhubaneswar:  The parallel roads from Jayadev Vihar to Nandankanan have been put on fast track with Chief Secretary Suresh Chandra Mahapatra inspecting the progress of works at ground level on Saturday.

After inspecting the roads, Mahapatra set timelines for different phases of the work.

The Chief Secretary directed the Works department to complete the left side road from Xavier square to KIIT square via Govt Poly Technique-Rail Vihar-Utkal hospital-OERC building-Trident-Infocity square and Sikharchandi within three months.

It may be pertinent here to mention that this road will be connected to Chandaka square via Patharagadia and Institute of Mathematics. The total road of around 13 kms has been estimated around Rs.92 crore for construction under seven stretches.

Out of this, 1.5 Kms of road has been completed and the construction work in four stretches are in progress.

Similarly, Mahapaptra also inspected the progress of the right side road from Acharya Vihar to Big Bazar square, and, directed BDA to connect the road up to Damana Chhak via Press Chhak-MCL square-Railway Stadium-Kelu Charan Park within three months.

The total road is about 6.25 kms estimated around Rs. 239 crore including the cost of land acquisition. Out of this, 1.05 kms of road has been completed and work of balance portion has been taken up.

Further, Mahapatra directed to plant the older seedlings on both sides and median of the new roads.

Mahapatra also emphasized upon strengthening the forest wall on side of the roads for protecting both the wildlife and the people.

Strengthening of forest walls would deter coming of the wild animal to the roads and residential areas. Forest and Environment department was asked to supply the older seedlings for the plantation during the current season.

With the completion of these parallel roads, the traffic pressure on Jayadev Vihar to Nanadankanan will be reduced substantially as the new roads will provide alternative connectivity to many residential and institutional areas.