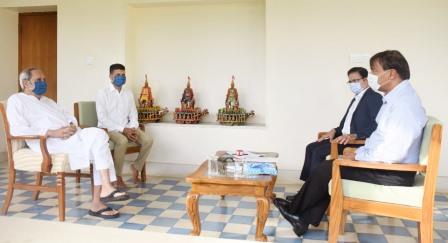 The meeting lasted for an hour which took place at Naveen Niwas, the residence of the Chief Minister.

According to reports, Mittal discussed the company’s proposed steel plant project at Kendrapara and other projects, which were acquired from Essar Steel.

also thanked the Chief Minister for all cooperation extended by the state government for the proposed steel complex.

On March 4, ArcelorMittal Nippon Steel India has signed a memorandum of understanding (MoU) with the Odisha government for setting up a 12 million tonne (MT) steel plant in Kendrapada district with an investment of Rs 50,000 crore.

AMNS already has a substantial investment in Odisha. The company is expected to complete the project to double its pellet making capacity to 12 mtpa at Paradip with an investment of ₹2,000 crore soon. It is also increasing beneficiation facility at Dabuna to 16 mtpa from 5 mtpa.

The company had bagged two iron ore mines in Odisha. It has already started mining at Thakurani mine while the one at Sagasahi is close to commissioning, said sources.