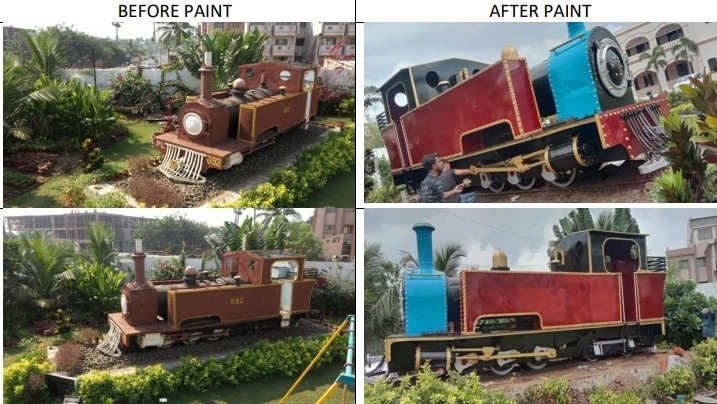 Bhubaneswar: The century-old Heritage Steam Locomotive PL-692 placed at BNR Hotel at Puri has been repaired and maintained by East Coast Railway, recently.

The saline air in and around Puri, had rusted the Engine completely. The roof of the engine has withered away. The boiler room is corroded.

Minister of Railways Ashwini Vaishnaw had received representations from different sections of society to maintain and upkeep of the locomotive.

The Minister had directed to repair and maintain the Locomotive as a part of preservation of Heritage Item.

Indian Railways Catering & Tourism Corporation (IRCTC) has taken over the management of the BNR Hotel. As IRCTC lacked in resources and technical expertise in maintenance of locomotive, it requested East Coast Railway for its upkeep and maintenance and the expenditure would be borne by them.

On request from the Hotel Management and IRCTC, East Coast Railway has taken steps to repair the necessary parts of the Heritage Steam Loco. Welding of different plates and putting a brand new livery has beautified the old engine.

The century-old railway locomotive was imported by Maharaja of Paralakhemundi. It was run by Parlakimedi Light Railway (PLR). The Paralakhemundi Engine known as “PL Class” was built by Kerr, Stuart and Company of England in 1904. The weight of the engine ‘PL-692’ is 20 tonnes. This locomotive was running on narrow gauge of PLR in the Naupada-Gunupur Railway Section.