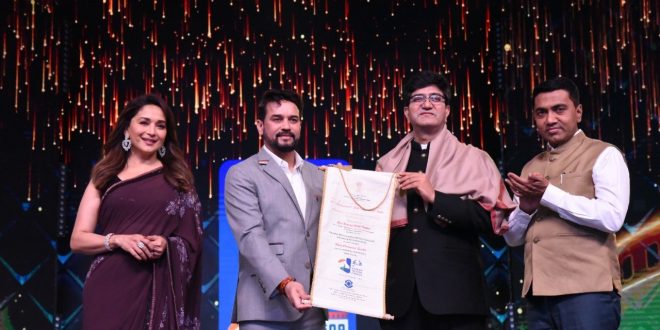 
“One Sky is less, bring me more skies”. Yes, this is what Prasoon Joshi, renowned lyricist and Chairperson, Central Board of Film Certification said on being presented the Indian Film Personality of the Year Award for 2021, at the closing ceremony of the 52nd International Film Festival, today, in Goa, today, November 28, 2021. The award has been conferred on him, for his contribution to cinema, popular culture and socially significant artistic work.

Known widely for his soulful and evocative lyrics in films, unique TV ads and socially relevant stories, Joshi, a Padma Shri awardee and winner of multiple other national awards, exhorted young and budding filmmakers to begin cherishing and celebrating the state of confusion. “Young minds should start celebrating the state of confusion. Confusion is the most fertile state and the most discomforting, but the best ideas have their origin in confusion.”

He cautioned aspiring filmmakers that there is no shortcut to great cinema, so filmmakers should never think they will arrive somewhere by shortcut.

Joshi said that one great thing about this edition of IFFI is the novel initiative “75 Creative Minds of Tomorrow”. “What I feel great about IFFI this year is the “75 Creative Minds of Tomorrow” competition, a great initiative. IFFI has been more than an award show, it has been a festival. What these 75 minds can do for the country, is what gives me hope.”  Joshi was the Chairperson of the Grand Jury for the initiative.

Addressing the closing ceremony, the Union I&B Minister Anurag Singh Tharkur expressed his personal gratitude to Prasoon Joshi for discussing with the Minister at length the idea of “75 Creative Minds of Tomorrow” and for working with him to make the idea a reality.

Joshi thanked IFFI for continuing to promote and celebrate the spirit of cinema. “I am thankful to IFFI for this recognition and congratulate them for championing the cause of cinema even during this challenging year amidst the pandemic.”

Speaking of his humble beginnings, Joshi dedicated the award to his hometown. “I come from a small town Almora in Uttarakhand. It is very hard for someone coming from a small town to get exposure to the world of cinema. I dedicate this award to the mountains of Uttarakhand where I drew my inspiration from.”

The celebrated lyricist spoke of the need for diversity being given a platform, in order for it to find reflection in cinema. “I am very hopeful about the future of Indian cinema because the diversity we have in this country is amazing. But, if the diversity doesn’t get a platform, it will not be reflected in our cinema. It will only reflect when all these voices from various parts of our country start telling their stories.”

How does one come up with good content, which stays true to this diversity and richness? Joshi called upon the audience to identify with and cultivate abundant concern for the struggles of our own nation. “Where will felt truths come from if you don’t relate to your own county’s struggles?  We don’t want the truth of potted plants, we want the truth of the banyan tree that has bloomed in our courtyard”.

Speaking about his inspiration, Joshi said, “If I can inspire anyone, I still feel I will keep doing what I am doing.”

The award was presented to him by the Union Minister for Information and Broadcasting, Shri Anurag Thakur, where other eminent personalities were also present.

Apart from being an internationally acclaimed advertising professional, Joshi is currently the Asia-Pacific Chairman of one of the world’s largest advertising companies, McCann Worldgroup and their CEO for India. He has also won coveted international awards including Golden lions at Cannes and Young Global leader by the World Economic Forum.

Sh. Joshi entered Indian cinema as a lyricist in 2001 with Rajkumar Santoshi’s Lajja, and since then he has been a part of films like Taare Zameen Par, Rang De Basanti, Bhaag Milkha Bhaag, Neerja and Manikarnika, Delhi 6 and many more, he has rekindled the faith that one can give constructive direction to the society through high caliber work in the popular genre.