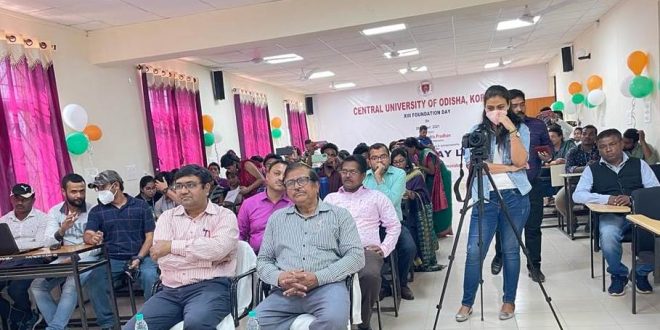 Film Festival on Culture of Odisha and Maharashtra held at CUO

Under this programme, the students of both universities are engaging in joint exercises in virtual mode as per Ministry of Education guidelines during February 24-March 15, 2022. On this occasion, a Film Festival was held on 3rd of March in virtual and blended mode based on the theme “Culture of Odisha and Maharashtra”

The session started with the Kulgeet of MGAHVV, the culture and the environment. The Introductory Note was given by Dr Yasharth Manjul, Faculty & Deputy Nodal Officer, EBSB, MGAHV, Wardha. Shri Kamal Swaroop, an eminent Indian film director, radio director and screenwriter. He traced the journey of cinema in Maharashtra.

On the occasion of film festival organized jointly, the films screened by MGAHVV were ‘Warli Painting’ and ‘Chhatrapati Shivaji’. The Central University of Odisha screened ‘Laxman Naik’ and ‘Tribes of Odisha’.

Prof. S.K. Palita, Vice Chancellor, CUO in his presidential address spoke about the similarities in the culture of Odisha and Maharashtra. He said, Chhatrapati Shivaji is equally known in Maharashtra as in Odisha, and Jagannath culture is equally popular in both the states.

Dr. Pradosh Kumar Swain, Faculty of the Dep’t of Odia & Coordinator of the Film Festival spoke about the film festival event in the programme. He was supported by Dr Ganesh Prasad Sahoo, Faculty, Odia Dep’t and Dr Chakrapani Pokhriyal, Faculty, Sanskrit Dept. The vote of thanks was proposed by Dr Surya Prakash Pandey, Faculty & Deputy Nodal Officer, EBSB, MGAHV, Wardha.

Prof. Hanuman Prasad Shukla and Prof. Chandrakanta Ragit, both Pro Vice Chancellors, MGAHV, Wardha; Dr. Sourav Gupta, Nodal Officer, CUO; Dr. Priyanka Mishra, Nodal Officer, MGAHV; Dr Phagunath Bhoi, PRO, CUO and dignitaries from both the Universities were present on the occasion. The programme was compeered in CUO part by Sibasis Palo, student in the department of Anthropology. The programme was attended by members of the faculty, non-teaching staff, research scholars and students of both the universities.