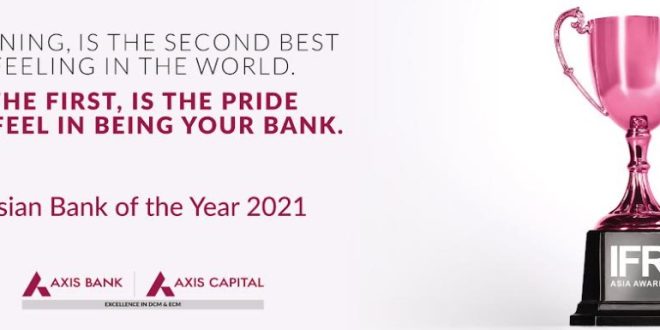 
Axis Bank, India’s third-largest private sector bank has been awarded IFR Asia’s Asian Bank of The Year, for its breadth of coverage and depth of expertise in the Asian investment banking space. The award acknowledges the bank’s outstanding performance in equity and debt issuance, across all major products and segments. Axis Bank was the only local house to serve as a global coordinator for the record Rs. 183 Bn Paytm IPO, and was also the global coordinator for Macrotech Developers’ Rs. 25 Bn IPO.

As per Refinitiv data, Axis Bank ranks first in India in DCM with 17.1% market share, which is twice than that of its nearest challenger. With the most senior team of 80 investment bankers in the counts, Axis Bank was able to climb to the third position in ECM despite strong competition from foreign houses. The bank has also helped open new markets for different issuers, such as HDFC’s Rs. 30 Bn three-year floating-rate bond offering.

In a bid to strengthen its ESG commitments, Axis Bank has worked on numerous significant deals such as the Renew Sun Waves’ Rs. 10.02 Bn bond offering and, Vector Green Energy’s offering, which was the first AAA rated deal from the renewables sector. The bank also sold India’s first sustainable AT1 issue, a USD 600 Mn perpetual non-call five issue priced at 4.1%, while acting as a joint global coordinator.

Commenting on this achievement, Axis Bank’s Deputy Managing Director Rajiv Anand said, “We are honored and extremely proud to be recognized for our efforts by the prestigious IFR Asia Awards. Our ‘One Axis’ philosophy has been a key area of distinctiveness to showcase our ability as a one-of-a-kind, full-service Wholesale Bank. Our synergized efforts have helped us establish leadership across the capital markets.”

This year, the bank has also won the ‘Best DCM House in India’ Award at the Finance Asia’s Country Awards. Axis Bank has been No. 1 on the Bloomberg League Table ranking for 15 consecutive calendar years and has maintained its leadership position in the domestic Debt Capital Market.