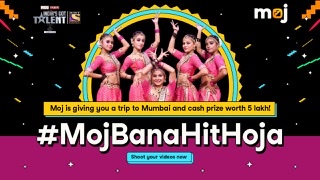 Through Moj auditions, Euphony wins wildcard round of India’s Got Talent among 1.2M video entries


Moj, India’s number one short video app, exclusively collaborated with Sony Entertainment Television to host the wildcard auditions of India’s Got Talent (IGT) Season 9. The wildcard auditions saw an enthusiastic response from the audience, with over 2L creators participating and generating about over 1.2M videos. Hindi-rock experimental band – Euphony won the wildcard round. The campaign hashtag #IndiasGotTalent also garnered about 15B video plays on the app. Following the enormous response for the wildcard round, Moj, in partnership with Sony Entertainment Television, is launching #MojBanaHitHoja. Winners of #MojBanaHitHoja will receive cash prizes worth INR 5 Lakhs and a chance to visit the sets of India’s Got Talent. The challenge will be live till 8th of April.

After screening millions of audition videos from brilliant artists throughout the country, Euphony was announced as the winner of the wildcard round. The band’s return to IGT results from their fans’ love and admiration. Euphony had already impressed show judges Kirron Kher, Shilpa Shetty Kundra, King Badshah, and Manoj Muntashir with their outstanding performances. They earned their first golden buzzer on the show’s Grand Premiere.
Lead Vocalist of Euphony, Sanish Nair, said, “Everything works out in the end. Once your heart is committed to achieving something, the universe finds motives to make it happen. It is only because of the love our well-wishers have showered on us that Euphony returns to the show, stronger than ever. The wildcard auditions on Moj was our golden opportunity, and we are glad we shot our bow in the direction.”

In an effort to continue searching for talented artists, Moj and Sony have extended the partnership and announced a new hashtag competition, #MojBanaHitHoja. To participate, users should upload videos on Moj showcasing their talent while using the hashtag #MojBanaHitHoja. The participants have the chance to win cash prizes of INR 5 lakhs, tour India’s Got Talent sets, meet celebrities, and watch the performance live.