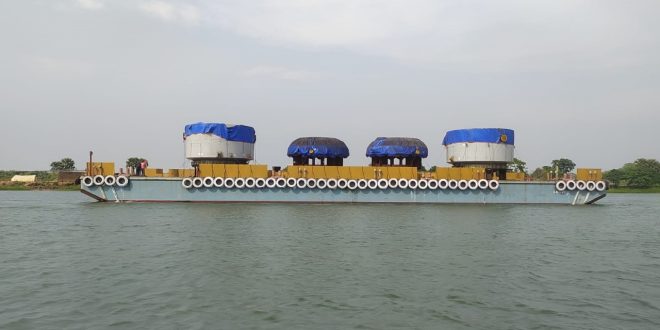 
Kalinganagar: Tata Steel became the first steel company in Odisha to use inland waterways to bring in heavy machinery for its Kalinganagar plant expansion project, reiterating its commitment to creating a carbon-neutral future.

Tata Steel’s consignment sailed in a chartered vessel from Shanghai to Paradip port in Odisha. It was then loaded on a barge that travelled up Luna River and was finally unloaded at Marsaghai, in Kendrapara district on March 15, 2022. Thereafter, the consignment was transported via roadways and reached the project site on April 2, 2022.

Tata Steel’s Engineering & Project (E&P) Division used multimodal logistics including inland waterways for shipping nearly 1000 Cubic meters (CBM) of four Super Over Dimensional Assembled Cargo (SODCs), each weighing up to 100 metric tonnes having a diameter of 8 meters. These project cargos are part of the Slag Granulation Plant that is being set-up in the Kalinganagar plant of Tata Steel.

Earlier this year, Tata Steel had undertaken its maiden multi-modal shipment of TMT bars from West Bengal to Assam via Indo-Bangladesh Protocol Route, becoming the first steel company in India to do so. It was a landmark effort to decarbonise the steel sector and the country.

On the initiative, Avneesh Gupta, Vice President (TQM and Engineering & Projects), Tata Steel, said: “This will pave the way for a sustainable logistics model with a potential cost advantage, which will be achieved through consolidation and import of plant and machinery in an assembled condition. This will also contribute towards decarbonisation of the steel sector and the country while also improving road safety due to minimized road movement.”

Tata Steel’s E&P Division has taken an initiative for executing multi-modal logistics to increase its capability in importing assembled over-dimensional cargos (ODC)/ Overweight cargos (OWC)/ Super ODC (SODC) project cargos by unlocking the potential of inland waterways to connect to the rest of world. This will eliminate the logistics challenge of bypassing enroute infrastructure constraints across the roadways. This will also increase flexibility of vessel options from foreign countries to various ports of India by connecting project sites of Tata Steel through a mix of inland waterways, coastal movement, and roadways transportation.

The waterway route will also open a new mode of transportation for Super ODC project cargos to overcome future challenges and uncertainties involved in road restrictions. This will also enable the import of bigger sized assembled equipment directly to the site, reducing fabrication, assembly, supervision job, etc. at the site.