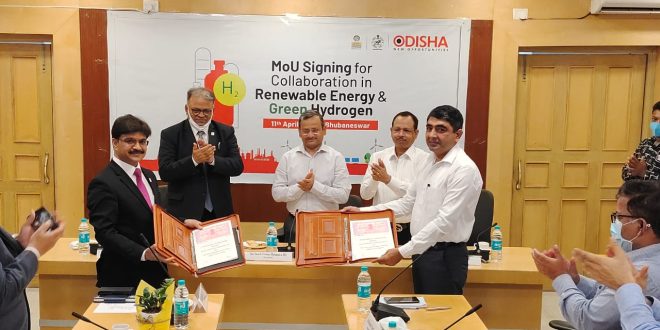 
Bhubaneswar:  IPICOL and Bharat Petroleum Corporation Limited (BPCL) joined forces to take a vital step towards the proliferation of green energy in the state.

On Monday, Sh. Bhupendra Singh Poonia, IAS, Managing Director Industrial Promotion and Investment Corporation of Odisha Limited (IPICOL), and Sh. Amit Garg, Executive Director Renewable Energy, Bharat Petroleum Corporation Limited (BPCL), signed a Memorandum of Understanding for a five-year period to collaborate in the fields of the feasibility of setting up renewable energy plant and green hydrogen plant (both for domestic and export customers), round the clock (RTC) power for consumers and proposed green hydrogen plants, setting up of requisite infrastructure, training, and knowledge sharing, etc.

Green Hydrogen would help the industries cut aggregate emissions of Green House Gases (GHGs) thus contributing to the overall objectives of the Government of India’s INDC targets. Odisha, being a power surplus state, is looking to further strengthen its position in power and these upcoming plants will help Odisha-based heavy industries to supplement their growing power requirements.

Sh. Suresh Chandra Mahapatra, IAS, Chief Secretary, Government of Odisha thanked BPCL for coming up with green hydrogen projects and said, “We have huge natural resources and due to the expanding steel making industry, green energy is a big prospect in Odisha. Also, we have major ports and developing new ones, which will help BPCL to export the green hydrogen and ammonia to other countries.

Welcoming all Sh. Hemant Sharma, IAS, Principal Secretary Industries, Government of Odisha said that today Odisha is the single largest manufacturer of steel in the country. More than 33% of the steelmaking capacity is now in Odisha though making it the primary prospect of green hydrogen and green ammonia. Because of the value addition policy, the demand is only going to increase in future.

Shri Arun Kumar Singh, Chairman, and Managing Director, BPCL stated that BPCL aspires to be the world’s most admired energy firm by combining skill and technology. Given our constant pursuit of customer service quality excellence, we at BPCL aim to achieve Net-Zero, in Scope I and II emissions, by 2040. BPCL also plans to spend Rs. 25,000 Crore to build a renewable energy capacity of 10 gigawatts comprising a mix of solar, wind, small hydro and biomass by 2040.

In his concluding remarks, Sh. Amit Garg, Executive Director Renewable Energy, BPCL thanked all the dignitaries for gracing the occasion and conveyed for creating and executing tangible milestones in furtherance of this MoU.