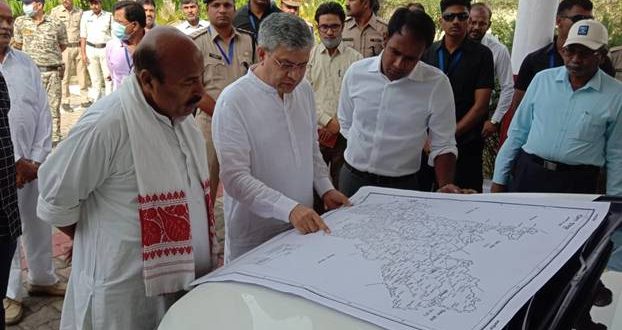 During his visit, Minister of Railways reviewed the works done in the Pradhan Mantri Gram Yojana in Bundelkhand region. Minister took stock of the development projects of Maharaja Chhatrasal Convention Center area. Minister of Social Justice and Empowerment, Government of India, Virendra Kumar and other public representatives were also present during the inspection.

During his interaction, Minister of Railways announced the operation of Vande Bharat Express from Khajuraho. He said that two rake points have been approved at Chhatarpur and Khajuraho. Along with this, he also said that rail tickets can now be obtained from 45,000 post offices. Soon ROB/RUB will be constructed at important places, he added. He also mentioned about the operation of Bharat Gaurav trains like Ramayana Express, Electrification which is to be completed by August. By that time, Vande Bharat will also start rolling out. He said that the vision of Prime Minister ‘The Government is to serve the people’ has to be followed in spirit while doing development of the region.

Minister of Railways also informed about the redevelopment of Khajuraho station to make it a world class station. Minister, along with the local administration and Railways, encouraged the farmers to set up solar plants on their land so that their income could increase. Pilot project is to be started with Bundelkhand. The land is to be identified soon. Kisan Morcha, Railway and District Administration to jointly identify the location. He also informed that One Station One Product Scheme is also being expanded so that local level products will be made available in the market through stations. 1000 stations will be included under this scheme, in which Chhatarpur station will also be included. He said that limestone industries near Panna are important. Panna is to be linked with Railways.