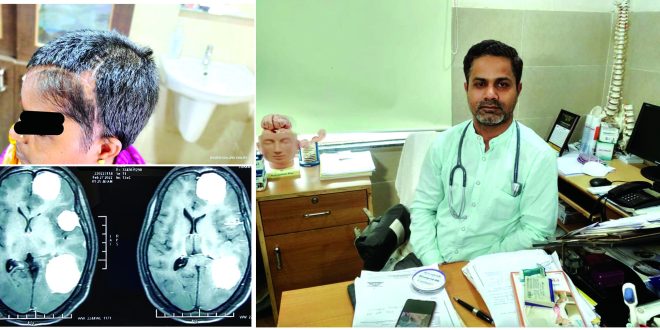 
Bhubaneswar: In a rare single surgery, neurosurgeons of Institute of Medical Sciences and SUM Hospital here have removed multiple tumours weighing more than 500 grams from the brain of a 30-year-old woman.

The woman, belonging to Daspalla in Nayagarh district, had come to the hospital with complaints like headache, vomiting and declining eye sight. She was examined by Prof. Srikanta Sahu, Head of the Neurology department and tests revealed that she had four or five tumours in the brain which was a life-threatening condition.

“Though it was a challenging situation, the medical team decided to go ahead with the surgery and remove all the tumors in one go. It meant that the patient could bleed and face paralysis,” Dr. Soubhagya Panigrahi, neurosurgeon in the hospital who led the surgical team, said.

The surgery took around five hours and the tumors could be removed successfully. Anesthesists Prof. Ranjita Acharya and Dr. Sudeep Mohapatra were part of the surgical team. Neuro interventionist Dr. Iswar Chandra Behera took care of the patient in the ICU.

The patient, who has since been discharged from the hospital, was treated under the BSKY scheme.