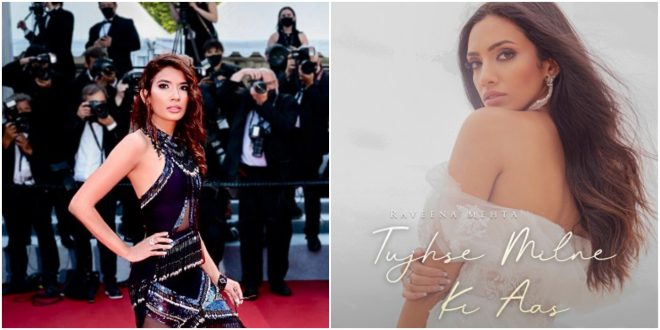 
Talk about making noise in tinsel town! Mansi Bagla is no new name in the industry now. From announcing her first film as a Producer for Forensic to walking at the Red Carpet at Cannes Film Festival 2022, Mansi has surely come a long way.

As she was leaving for the Cannes Film Festival, where she was invited to talk about her collaboration with Ruskin Bond and his stories, she confirmed signing director Mohit Suri for the same project. She released her first promotional song ‘Tujhse Milne Ki Aas’ from Cannes starring renowned artist and singer Raveena Mehta, created in gratitude to Mohit Suri, for coming on board for this project. The teaser was launched at Monte Carlo for the Red Carpet Fashion Week at the prestigious hermitage hotel.

Mansi Bagla, Producer Mini Films says,”I can’t thank Mohit sir enough, his expertise, craft and love for cinema will most certainly elevate my vision for the Ruskin Bond Anthology. I myself truly believe in the power of love, and what he depicts in his films like Aashiqui 2 surpass anything that words would be able to describe. I am grateful and excited about this opportunity. Here’s to the power of love!”

At the Cannes Film Festival, Mansi shot for a beautiful music video with Raveena Mehta who was last seen in a music video with Tiger Shroff. The duo celebrated the Teaser launch for the promotional song for the Ruskin Bond Anthology Falling in Love again at Cipriani Monte Carlo.

Mansi Bagla says,“Raveena is an international, global citizen with a very unique vocal style and texture. I have not yet come across a vocal tone which balances Indian and western styles as she does, she really embodies the new age Indian woman. She is absolutely fashionable, speaks very eloquently and is a gem to work with. Raveena is extremely enterprising and ambitious and I have no doubts that she is going to reach every goal she sets. From America, Belgium to London and Dubai she has worked in all countries creating her presence through fashion shows, musical performances and music video shoots.”

Raveena says,”Mansi is truly a visionary, she is absolutely set with her vision and goals, and is all about the right strategic execution. She is authentic and is here to create something that will leave a lasting impact on the world and cinema. It has been an absolute pleasure getting to know and working with Mansi. She exudes positive energy. I’m excited about her journey and looking forward to witnessing her soar even higher.”

While Mansi made her Day 1 appearance at the film festival looking sleek and sexy in a black bodysuit gown by designer Dimple Mehta, her film Forensic trailer and release date was announced back in India.

Day 2 of the Cannes Film Festival, saw Mansi wearing a beautiful shimmery tube gown by designer Rocky S in which she sashayed down the red carpet, all eyes and cameras flashing at her. “This has been one of the most surreal experiences of my life. I have walked red carpets earlier but none that could match the magnum opus that the Cannes Film Festival was. I am so honoured to be able to be one of the people representing my country India here,”Mansi said.