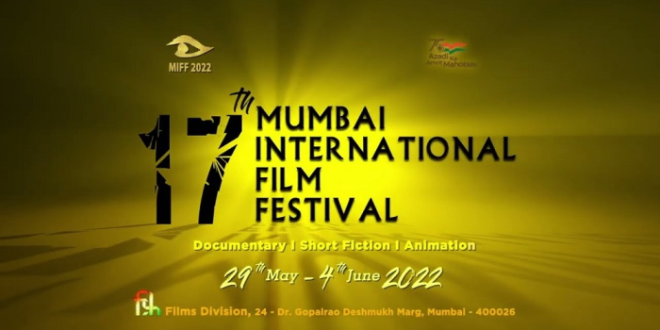 
With an offering of over 400 films in its 17th edition, the highly anticipated Mumbai International Film Festival is back with a bang! Scheduled for an exciting inaugural event today, one of the oldest and largest film festivals for non-feature films in South Asia is looking forward to an overwhelming response, especially after the immersive extravaganza of 16th Edition of Mumbai International Film Festival (MIFF) was lauded in 2020.

While the Mumbai International Film Festival (MIFF) is also about the unconventional, it is still a perfect mix for film buffs and art lovers in search of soul soothing stories. Interestingly, the hybrid mode of the 17th Edition of MIFF includes a digital viewing option that is free of cost. The festival also boasts the following main attractions to the event: Homage, Special Package, Special Screening, Masterclass and Workshops. MIFF also has Oscar films to showcase. There is a lot to expect from MIFF this year.

The Mumbai International Film Festival (MIFF), is a prestigious platform that showcases and promotes personalities with artistic and technical merit in the movie industry. MIFF holds a great significance to the filmmaking world. Hence, having one of the best in the trade to hold a Masterclass for anyone is an overwhelming experience in itself!

A veteran in the Academy Awards nominations, Carter Pilcher has been repeatedly nominated for his short films. As a pioneer and the Founder-CEO of ShortsTV, the world’s leading short movie entertainment company, he has come a long way. While Carter grew up in a small village without television or cinema, he also did not receive any formal education in the creation of moving images. He believes that it is the mysteries of life that made him become a filmmaker and that is primarily why his films are highly personal. They are like his own memories! In ‘Qualifying your films for the Oscars’ Masterclass to be held on 30th May, 2pm onwards, he is looking forward to incorporating imagery, video and the making-offs in four fascinating chapters!

Academy Award-winning sound designer Resul Pookutty will be seen taking on the ‘Aesthetics of sound in Cinema’ in a befitting Masterclass on 3rd June, 3:45pm onwards. Famed internationally for bringing Indian cinema sound to International acclaim, the Padma Shri recipient is also known in the music industry to blend technology with strong Indian aesthetics. He is also credited with bringing film sound as an art and craft to the forefront!

To genuinely appreciate good film making, anyone can walk in for a great experience at MIFF. Come and experience the magic of cinema with the 17th Edition of Mumbai International Film Festival from 29th May to 4th June, 2022.