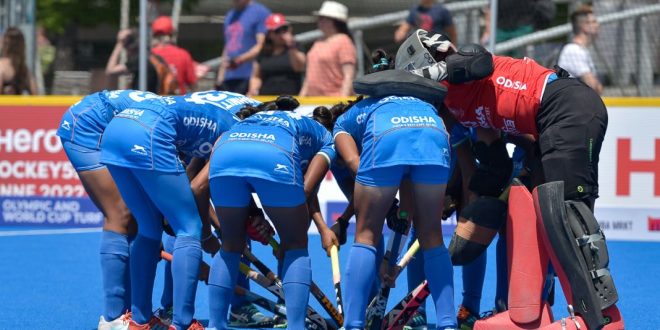 
Indian Women’s Hockey Team picked an emphatic 4-3 win over the hosts Switzerland, and then drew 4-4 to South Africa on the second day of the FIH Hockey 5s 2022 at the Place de la Navigation Stadium in Lausanne, Switzerland on Sunday.

Despite the big win over the hosts, India missed out on a spot in the Final with the draw against South Africa, and finished in the 4th position in the table with 4 points.

In their third match in the competition, Mumtaz Khan (10′, 14′, 17′) scored a hat-trick while Rutaja Pisal (3′) also scored a goal to help India pick up the win against the hosts Switzerland. For Switzerland, Sarah Zepf (2′), Dunja Hartsch (4′), and Sofie Stomps (11′) scored the goals.

India got off to a bright start, getting an early shot on target, only to be denied by the goalpost. Switzerland took an early lead with a shot from a distance by Sarah Zepf. But India equalised straightaway with Rutaja Pisal’s shot. Minutes later, Switzerland took the lead again as Dunja Hartsch struck the ball into the nets from the halfway line. Zepf opened up again for a clear chance but her shot went wide. Just before the whistle, Mumtaz Khan hit the ball into the nets and India levelled the score at 2-2 at halftime.

Switzerland regained their lead straightaway in the second half, with Sofie Stomps getting her name on the scoresheet. Stomps continued to threaten Indian defence but Captain and goalkeeper Rajani Etimarpu kept the opposition at bay. Mumtaz Khan scored twice to get her hat-trick and put India in the lead. India managed to hold on to their lead till the final whistle and picked up a solid 4-3 win.

South Africa took an early lead in the match as Captain Dirkie Chamberlain struck the ball into the nets from the halfway line. The Proteas doubled their lead minutes later with Candice Manuel deflecting the ball into the nets from an acute angle. Dirkie Chamberlain scored her second goal in the match to extend her team’s lead to 3-0. But Mumtaz Khan scored twice, and Rutaja Pisal scored once as India levelled the score before the end of the first half.

India took the lead early on in the second half with Mariana Kujur scoring her first goal in the tournament. Captain Rajani Etimarpu made two big saves to deny Proteas the opportunity to get back on to the level terms. Mumtaz Khan took a reverse hit on target, only to be denied by Proteas goalkeeper Mmatshepo Modipane. Captain Dirkie Chamberlain completed her hat-trick as she nestled the ball into the nets to draw level. Both teams fought till the final whistle but the match ended in a 4-4 draw.