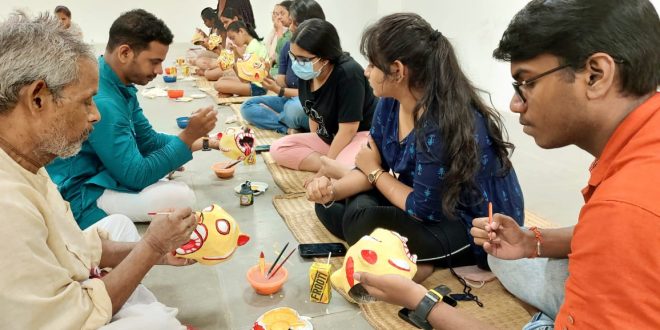 
The Raja Mahotsav has been held for two days on June 14 and 15 at Odisha Handicrafts Museum- Kalabhoomi under Handlooms, Textiles and Handicrafts Department, Government of Odisha.

The main aim of the festival was to preserve the art and culture of Odisha as well as celebrate the Festival of Raja.

Various activities organized on the first day of the Raj are handicrafts preparation, art skills, displays of quality (e.g. Paintings and Soura Paintings, Carvings of woods, engraving of palm leaves & orata and charkha used for weaving), Pottery, Paper masks and Straw workshops etc. The paper mask handicrafts workshop was conducted under the supervision of National Award winning Purushottam Mohapatra and was attended by 20 enthusiastic audiences.

The Straw handicrafts workshop was conducted under the supervision of National Award winner, Pradeep Naik and was attended by 20 enthusiastic spectators. The said art skills and workshops were attended by visitors/tourists from every section. The participants were issued certificates on behalf of Kala Bhoomi.

On the occasion of Pahili Raja / Holy Devasnan Purnima, a cycle of discussion related to Nabakalebal and Rath Yatra was organized at Kala Bhoomi. Dr Surendra Kumar Mishra joined the keynote speaker and spoke on this matter. Around 60 people participated in the discussion cycle.

On the occasion of Raja, a Craft Bazar was organized in Kala Bhoomi campus by alumni of State Institute for Development of Arts and Crafts (SIDAC) with their handicrafts products such as stone, wood, terracotta and design development materials etc. To make the atmosphere of Kala Bhoomi more exciting, Sambalpuri dance was performed by Shankar Behera and companions of Balangir on June 14 at Open Air Theatre. Around 1000 spectators participated in the cultural evening and enjoyed dance and music.

The second day of the Raja Mahotsav on June 15, besides, organisation of other workshops, the renowned Odissi dancer from Odisha, Sashwat Joshi performed Odissi dance at the Open Air Theatre. More than 4000 spectators participated in the cultural evening.

On the occasion of Raja, various traditional cakes of Odisha, and raja Pan were also arranged in the premises of Kala Bhoomi. Raja Doli was also arranged for the visitors/audience in Kala Bhoomi. The musical instruments of Tabala and Sitar were performed by Pramod Pati and his companion on June 14 and Banshi and Tabala were performed by Sushant Kumar Jena and his companion on June 15 to further mesmerize the pleasant atmosphere of Kala Bhoomi.