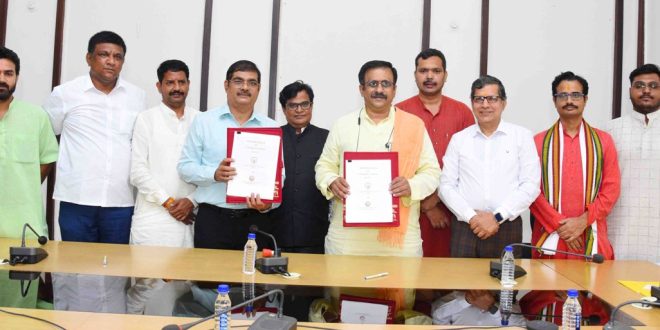 RFRF has been founded by Bharatiya Shikshan Mandal, a voluntary organization with the core objective of bringing a paradigm shift in research outcome, methodologies and innovation based technologies, with a ‘Bharatiya’ prospective, philosophy and applicability.

Speaking on the occasion, Kanitkar said with the signing of the agreement with SOA, RFRF had already signed MoU’s with 194 universities and was collaborating with several IITs on mission mode projects. It intended to facilitate research work in the universities and research institutes from an Indian perspective, he said.

The field of research included environment, which was facing rapid deterioration and agriculture. It had already launched a program ‘Know Your Rivers’ involving 1.40 lakh students which was greatly helpful in collecting data about various river systems in the country, he said.

Pointing out that 18 per cent of India’s agricultural produce was getting wasted for lack of storage facility and during transportation, Mr. Kanitkar said more than 60 per cent of farmers with small holdings had no facility to store their produce.

Research was being done on finding small cold storage solutions and post-harvest management, he said adding the other research areas included the Indian family, the changes it had faced over the decades and skill development.

Kanitkar described SOA as a good centre for taking up multi-disciplinary research because the university had a wide range of discipline from engineering and medicine to agriculture.

Prof. Nanda said SOA was focused on multi-disciplinary research with 16 research centres and  58 research labs. It was focusing on nanotechnology, biomechanics and biomedical research as also climate-centric investigation for the benefit of the agricultural sector.

Kanitkar also called on SOA Founder-President Prof. (Dr.) Manojranjan Nayak and had an exchange of views.

Later, addressing students and faculty members on the subject ‘The role of research in the resurgence of India’, Kanitkar said a paradigm shift was taking place in India’s education system with technical education like engineering and medicine being taught to students in their own language.

English education had been a hurdle in the resurgence of India and the need was to restore the country’s ancient glory by using the huge talent available locally, he said adding USA had succeeded in becoming the number one economy in the world by attracting the best talents from different parts of the world including India.

“India will truly become ‘Jagatguru’ when students from across the world will queue up for admission into Indian universities in recognition of its wisdom and research potential,” he said.