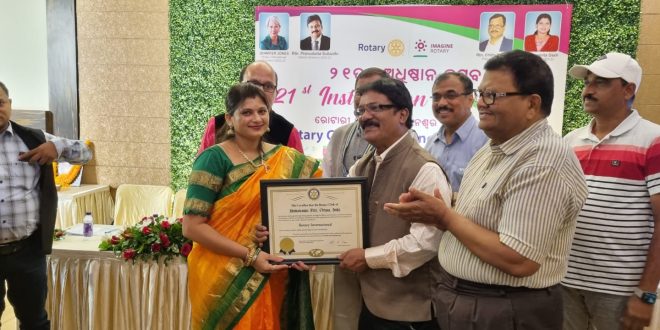 On this occasion, Narendranath Jena, Editor, News 18 Odia attended as the Chief Guest along with many Rotarians.

Jena appreciated the many tangible works being done by the Rotary Club in the society and the various works towards building the society.

As the guest of honour, Yangyashish Mohapatra, who has been elected as the District 3262 Governor for 2024-25, said that strong will leads a person to success and praised the various welfare programs undertaken by the club in the past few years.

Zonal Chair Ramesh Sahu and Assistant Governor Shubhendu Mohanty expressed the opinion that this club is giving a good message to the society to give important responsibility to a woman for the first time while the oppression of women is increasing in the society.

Rotarian Saroj Dash, Director of public image of the club, said that Sushma Sarangi and Lashmipriya Bose have taken charge as new members.