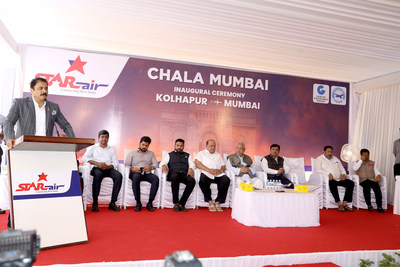 
Star Air, the aviation arm of Sanjay Ghodawat Group, inaugurated its direct flight services between Mumbai and Kolhapur under the Regional Connectivity Scheme.

The launch of Kolhapur not only celebrates the expansion of Star Air’s travel route but also marks the airline’s homecoming, as it serves as the base of Sanjay Ghodawat Group’s operations. With Kolhapur transitioning itself into a commercial hub, Star Air looks forward to serving its passengers with seamless connectivity, utmost care and comfort by reducing the current 8-10 hour travel time via road and rail to just under an hour.

Owing to its spiritual history, Kolhapur is also known as ‘Dakshin Kashi’. Not only is it one of the oldest civilizations in the country, but it has also become an important industry and tourism hub. Famous for its agricultural and manufacturing industry, pilgrim sites, jewellery, leather chappals, historical monuments, and sports, particularly wrestling, it is a confluence of culture and tradition that promises great connectivity and economic prosperity.

Commenting on the milestone achievement, Mr Shrenik Ghodawat, MD – Star Air, said, “We are pleased to announce our homecoming flight. With the beautiful city of Kolhapur serving as SGG’s operations base, it is a surreal feeling to connect Star Air to its parent company. With the launch of Kolhapur as our 19th destination, it promises easy access to tourist attractions like the famous Town Hall, Khasbag Maidan, Panhala Fort, and religious destinations like the Mahalaxmi Temple. The launch of our new destination will not only bolster trade but also strengthen tourism between the cities. We hope to add many more regional cities to the travel map of India in the future.”

Star Air will operate thrice a week between Mumbai and Kolhapur on Tuesday, Thursday, and Saturday to begin with and will plan to expand the frequency to a daily service after observing the passenger response. These scheduled flights plan to offer passengers the most affordable prices under the popular UDAN scheme.