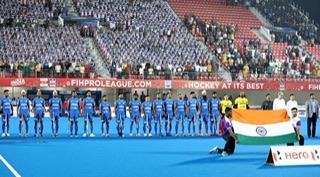 
Bhubaneswar: In a big boost to the morale of the Indian Men and Women’s Hockey Teams, Hockey India on Sunday announced a new policy in which players will be assured of cash incentives annually.

Under the new leadership of President Padma Dilip Tirkey and Secretary General Bholanath Singh, Hockey India will give away cash award of Rs 50,000 each for players and Rs25,000 each for support staff for every win the Indian Teams register.

The new policy will be a big shot-in-the-arm for players particularly those who come from difficult financial backgrounds. The award will be for the playing members of the squad.

Only one week ago, Hockey India had announced Rs Two lakh each to the players and One lakh each for support staff of the Indian Junior Men’s Team who won the prestigious 10th Sultan of Johor Cup.

Speaking about the latest initiative, Hockey India President Dr Dilip Tirkey said, “Hockey India has unanimously decided to award cash incentive of Rs50,000 each to the players of the Indian Men and Women’s Hockey Team for every victory they register from here on. The support staff will also be awarded with Rs25,000 each and this cash incentive will be given away annually. I strongly believe this announcement will boost the morale of the Indian Teams as they prepare for the prestigious World Cup in January and the Asian Games. While every player in the core group is employed, an incentive like this will attract more youngsters to play hockey.”

Reflecting Tirkey’s thoughts, Hockey India Secretary General Bholanath Singh said, “I believe this is a landmark decision taken by Hockey India. It will not only lift the spirit of the Indian teams to vie harder for victories but it will also make young aspiring hockey players believe that hockey can be a financially viable sport. I wish the Indian teams the very best in their endeavours.”