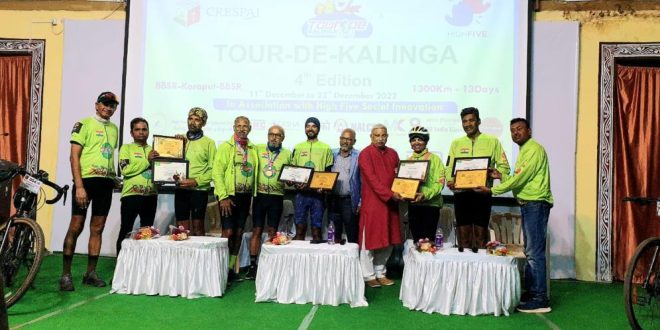 
Bhubaneswar: Organised by ROOTS OF ODISHA FOUNDATION and supported by HIGH FIVE SOCIAL INNOVATION and MISSION ODISHA, the 4th edition of TOUR-DE-KALINGA ended on a grand note at Centre for Youth and Social Development (”CYSD”).

TOUR-DE-KALINGA categorised to be the longest community pedaling expedition 1300 km in 13 days was ended in Bhubaneswar yesterday on 23rd December 2022.

The team with their aim to sensitize public on the need of pedaling to work as action against increased global warming has visited schools, colleges, universities such as Khemundi College, Centurion universities, GIET, Phulbani Autonomous College, Nayagarh Autonomous College, Ranpur College etc to interact with students, the next gen citizen.

Chairman of ROOTS OF ODISHA FOUNDATION and the Chief Organiser of TOUR-DE-KALINGA CA. Sudhir Kumar Dash while addressing the gathering at CYSD expressed his concern that Odisha has tremendous potential for Eco and adventure tourism that can create crores of employment for the people of Odisha.

While praising the Chief Minister and the Administration for their focused approach in creating sports culture in the state, he said the state has emerged as the Sports Capital in the country, but the effective spending of mere 15 crore can create over 15 lakh jobs in the state in the tourism industry within just couple of years and there are many volunteers like him to contribute to the mother state in helping our state progress.

Presented in the Gathering Social Activist and Former member of Legislative Assembly Dr. Dileep Srichandan said that Odisha has a good forest coverage that requires strong protection but in the recent past its share of the forest region is rapidly losing grounds due to deforestation. The people should plant a tree and protect it in every birthday of theirs.

Social Reformer in Badri Narayan Mishra while praising the efforts of ROOTS OF ODISH FOUNDAION said we the various civil society members should join hands with the organiser of ROOTS OF ODISHA FOUNDATION for making TOUR-de-KALINGA even bigger, world class and a mass scale civilian movement.

The TOUR Director Yogendra Singh recalling his cycling tour in London EdenboroughLondon(LEL) and Paris brest Paris (PBP) days said that the terrain of Tour-de-Kalinga is million times better than LEl and PBP for that matter. The Government of Odisha should not neglect the tourism potential of the state further.
Ollywood Singer Rama Krishna, Social Activist Bipin Mohanty, Senior Journalist Madhusudan Mishra were present.