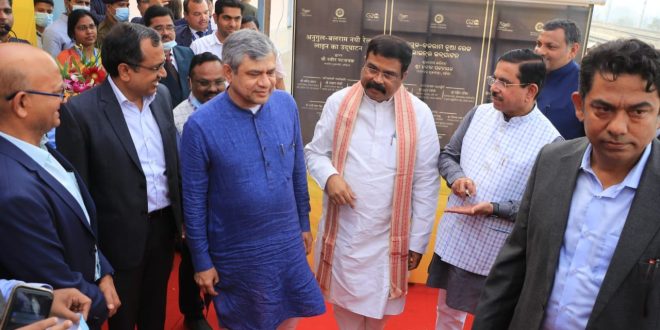 
Angul: Coal evacuation from Talcher coalfields got a major boost with inauguration of a 14-km-long Angul-Balram rail link, which would enable Mahanadi Coalfields Limited (MCL) to increase daily despatch of coal to the consumers by about 40 thousand tonne.

The Angul-Balram rail link is the first phase of a total 68-km-long Inner Corridor — Angul-Balram-PutugadiaJarapada-Tentuloi — which will cater to the coal mines of Talcher coalfields in Angul district of Odisha.

In the MCRL, MCL, as a representative of the Ministry of Coal, has 64% equity shares, while IRCON, representing the Ministry of Railways, has 26% and IDCO, representing the Govt of Odisha, has 10% equity shares. This JV was formed in 2015 to undertake Project development, financing and implementation of common rail corridor for the identified coal projects in the state of Odisha.

The Inner Corridor is being implemented by MCRL in two phases. In the Phase-I, 14-km-long Angul-Balram Rail Link was to be constructed, while in the Phase-II 54-km-long Balram-Putugadia-Jarapada-Tentuloi rail-link would be completed. IRCON International Ltd is the implementing agency of this project, being developed at an estimated cost of Rs 1,700 crore.

Commissioning of the first phase, Angul-Balram rail-link, has enhanced the potential of MCL to despatch coal by 10 more rakes daily.

The rail-link will also facilitate evacuation of dry fuel from the coal blocks allotted to miners other than the Coal India in Talcher coalfields.