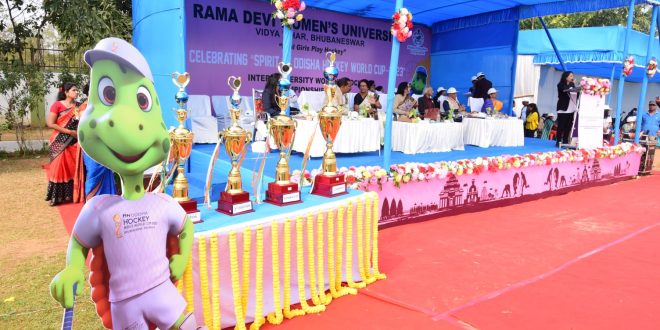 Hockey is our national sport and we should foster the spirit of hockey, said Ananta Narayan Jena, a Member of the Legislative Assembly of Bhubaneswar.

In light of 2022 Women’s Hockey World Cup, Jena motivated the audience and called upon to popularize the soil of Odisha for the sports of hockey.

Prof. Aparajita Chowdhury, Vice-Chancellor of the university stressed the spirt of hockey in Odisha and the entire country.

She further pointed out that first time the Inter University Women’s Hockey Championship has been organized and it has healded in a new era in the age of sports.

Hockey is a game for all. Not only men but also women have all rights to play hockey with all their hearts and dedication said Prof. Sabita Acharya, Vice-chancellor of Utkal University, Bhubaneswar.

How women’s hockey can be promoted not only Odisha , but also globally should be the prime motto. Odisha has been blessed with great hockey players since the years and so Higher Education department, Govt of Odisha has been taking promising steps for the promotion of women’s hockey championship, Prof Prafulla Kumar Mohanty, Vice-Chancellor, Khallikote University, Berhampur asserted.