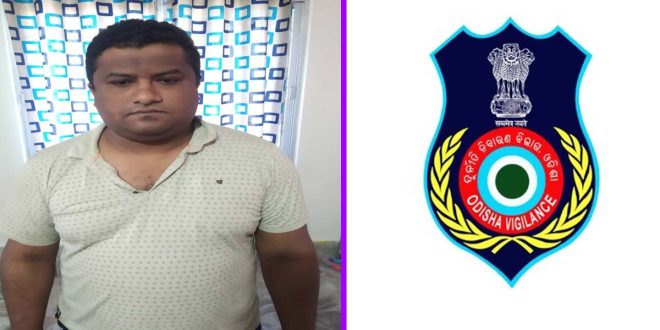 
Rayagada: The Odisha Vigilance officials on Sunday night nabbed an assistant soil conservation officer, Rayagada while he was carrying ill-gotten cash of Rs 5,04,560 near Aravninda School in the town.

The accused has been identified as Kishor Chandra Nayak

According to the officials, Nayak was intercepted by a team of Odisha Vigilance while carrying suspected ill-gotten cash of Rs 5,04,560 (kept in a bag pack) near Aravninda School, Raygada on  his way to his  residential rented house at Raygada by his motor cycle for which he could not account for satisfactorily.The cash was recovered from his possession and seized.

Soon after interception, during search of his rented residential house located near Mangala Mandir, Rayagada, another cash of Rs 6,30,00o has been found. With this the total cash seizure comes to Rs 11,34,560.

Following the cash seizure, raids are being conducted at his rented residential house located near Mangala Mandir in Rayagada. His wife’s residence at Patrapada Kishor Vihar, Lane-2, under Khandagiri police station limits in Bhubaneswar and parental house located at Mantriguda in Nabarangpur district.