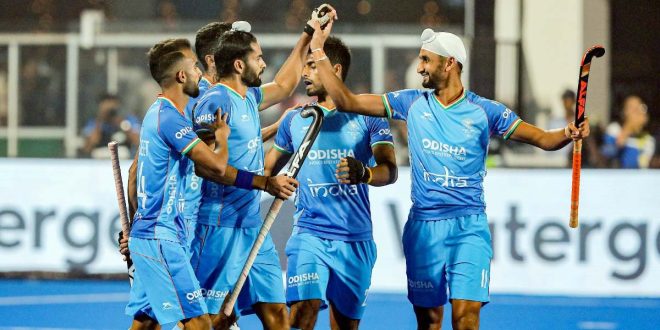 
In a crucial tie that would determine the table topper in Pool D of the FIH Odisha Hockey Men’s World Cup 2023 Bhubaneswar-Rourkela, Indian Men’s Hockey Team held their nerves to beat a spirited Welsh side 4-2 here at a packed Kalinga Hockey Stadium on Friday.

Though the hosts won the match, it is England, with two wins (5-0 against Wales and 4-0 against Spain) and a draw (against India) who finished on top of the pool by virtue of goal difference and qualified directly for the Quarterfinal. India, on the other hand, will need to play against New Zealand in the crossover match on Sunday, 22nd January.

Having registered one win (2-0 against Spain) and one draw (0-0 against England) in pool D so far, the unbeaten Indian Team were on song when they got off the mark against Wales. The forwardline with the help of Manpreet Singh who played lynchpin in India’s midfield created some lethal attack inside the Wales 25m mark. Although the first quarter slipped by without any goals being scored, India made a breakthrough in the 22nd minute through Shamsher Singh, who was playing his 50th International match today.