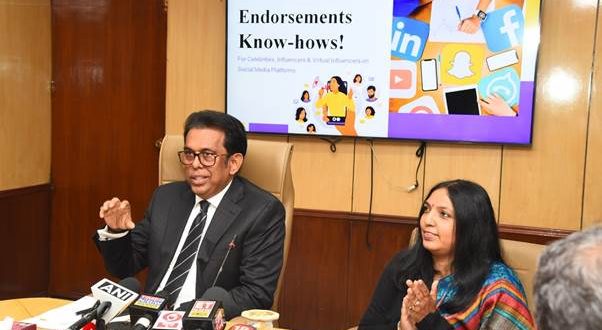 The guide aims to ensure that individuals do not mislead their audiences when endorsing products or services and that they are in compliance with the Consumer Protection Act and any associated rules or guidelines.

Rohit Kumar Singh, Secretary Department of Consumer Affairs released the “Endorsement Know-hows!” in response to the rapidly growing digital world, where advertisements are no longer limited to traditional media like print, television, or radio.

With the increasing reach of digital platforms and social media, such as Facebook, Twitter and Instagram, there has been a rise in the influence of virtual influencers, in addition to celebrities and social media influencers. This has led to an increased risk of consumers being misled by advertisements and unfair trade practices by these individuals on social media platforms.

The “Endorsement Know-hows!” specify that disclosures must be prominently and clearly displayed in the endorsement, making them extremely hard to miss. Any celebrity, influencer or virtual influencer who has access to an audience and can influence their purchasing decisions or opinions about a product, service, brand, or experience must disclose any material connection with the advertiser.

This includes not only benefits and incentives, but also monetary or other compensation, trips or hotel stays, media barters, coverage and awards, free products with or without conditions, discounts, gifts and any family or personal or employment relationship.

Endorsements must be made in simple, clear language and terms such as “advertisement,” “sponsored,” or “paid promotion” can be used.

They should not endorse any product or service and service in which due diligence has been done by them or that they have not personally used or experienced.

The guide is released in alignment with the guidelines set by the Consumer Protection Act of 2019.

It states that misleading advertisement in any form, format or medium is prohibited by law.