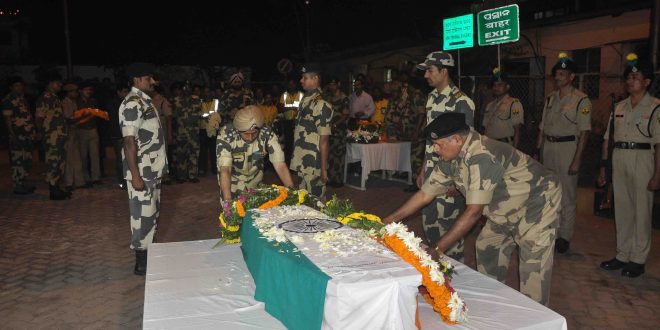 BHUBANESWAR: The mortal remains of BSF jawan Kishore Rout, who was killed along with nine other BSF personnel in the air crash in Delhi, has arrived in the capital city of Odisha.

After his body arrived at Biju Patnaik International Airport here, he was given a guard of honour. Kishore Rout’s body would be brought to his ancestral village in Rajkanika block where it will be consigned to flames with the guard of honour.

Meanwhile, a pall of gloom descended on the sleepy Deultarapatana village in Odisha’s Kendrapara district after the news of the death of Kishore Rout spread in his village.

Ten Border Security Force (BSF) jawans were on board the Ranchi-bound twin-engine BSF aircraft when it crashed close to the IGI Airport.

When 67-year-old Balakrushna Rout, Kishor’s father, got a call from the BSF office in New Delhi about his son’s death in the crash, he sat in disbelief.

Kishor was his only son and had joined the BSF in 2001.

“He had done his BSc and MBA before joining the paramilitary force. Kishor worked in Kashmir for ten years and since 2012, he was working in Palam airport,” said Balakrushna, who also worked in the BSF till he retired in the year 2000.

Kishor is survived by his wife Pragati and two sons, Sriharsha (10) and Aditya (2).

After learning about the tragedy, hundreds of people from Deulatara and neighbouring villages gathered at Balakrushna’s house.