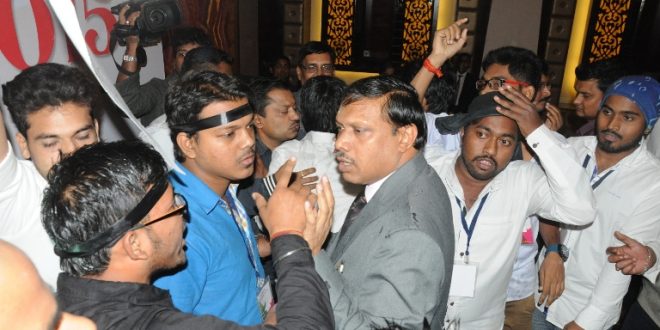 BHUBANESWAR: Tension prevailed at the Biju Patnaik University of Technology (BPUT)’s Alumni Meet in the capital city of Odisha here on Sunday when irate students went on a rampage and allegedly hurled eggs, tomatoes and water bottles on BPUT vice-chancellor.

BPUT VC Shyam Sundar Pattnaik was also heckled in the Alumni Meet held at a hotel in Bhubaneswar.

Sources said the irate students threw eggs, tomatoes and show black flag to Pattnaik for the delay in publishing results, issuing certificates and not ensuring jobs to them.

Even though the Commissionerate Police personnel rushed there and rescued VC from the clutches of the angry protesters, palpable tension still prevailed there.

The students are demanding immediate ouster of the VC alleging that his tenure is full of irregularities and utter mismanagement.

The BPUT Alumni Meet began at around 3.30 pm while the VC reached the venue at around 4 pm when he faced the unruly scene and ire.

Reacting over this, Pattnaik said, “If all problems would be solved after I left the  Biju Patnaik University of Technology, I am ready to leave.”